If this is Thursday it must be postcards, 76 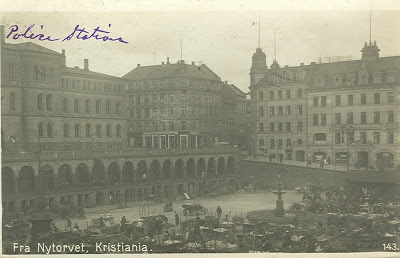 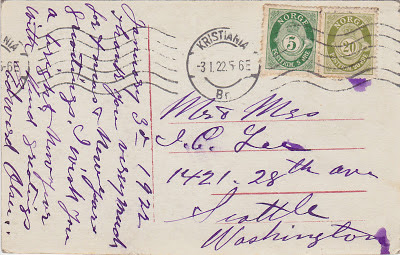 This postcard dated 1922 was sent to the Lees by their friend, Edward Olsen.  Olsen traveled all over the world and often sent them cards from the places he visited.  Pictured on the card is the old Police Station in Kristiania, now Oslo, Norway that was designed by Jacob Wilhelm Nordan and built in 1866.  The square was called Nytorv (Nytorvet) or New Square from 1852 to 1951 when the name was changed to Youngstorget after the merchant Jørgen Young (1784-1837) who owned the street.   Young was listed as the richest man in Norway for the years 1833 and 1834.  The photograph below from Wikipedia shows a modern color view of the Station. 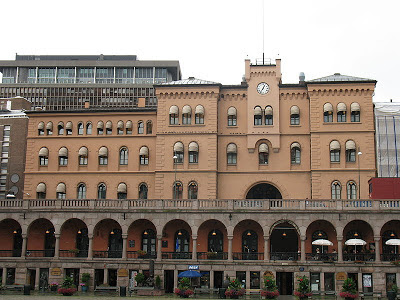 I.C. Lee was a police sergeant with the Seattle Police Department so I am guessing that is why Olsen sent this particular postcard to him.  It probably would have been an interesting thing for Lee to receive.

There was an outdoor market or bazaar around the square and under the station.  It is a little hard to see due to the dark coloration on the postcard but in the foreground there are several people in the picture, both men and women, and many, many carts with goods piled up in them.  It was also interesting to find out that the labor union organizations are headquartered in this same area of the city.  Although the name of the square was not officially changed until 1951 the local population always referred to it by its current name of Youngstorget.

The architect, Jacob Wilhelm Nordan (1824-1892), was born in Denmark but worked in Norway.  He designed many buildings in addition to the Police Station and over 100 churches during his career.  He also taught at the Royal School in Kristiania/Oslo.

The stamps found on the card are called “post horn stamps” and first appeared in 1871.  When the postman arrived with the mail he would blow his horn to let the people know the mail had come.  He also blew the horn when he left to go to the next stop.  With the passage of time the horn came to symbolize mail service.  Today red mailboxes with a gold post horn design are quite common and can even be found in the United States where Scandinavian Americans have chosen to advertize their ancestry by using them for their home mail collection in place of the rather boring plain mailboxes that are the norm here.  In addition to the horn the stamp is decorated with the Royal Crown and the corners have small wheels with wings to indicate speedy delivery of the mail.  With just minor coloration differences this design is still being used today on Norwegian postage stamps. 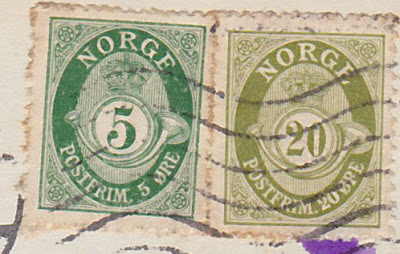 For more information about the stamps see:
http://www.stampsofdistinction.com/2008/03/norways-post-horn-stamp.html
at 8:25 AM