If this is Thursday it must be postcards, 372 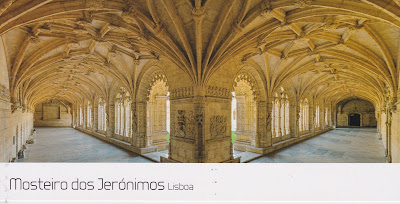 
The St. Jerome Monastery is located within the city of Lisbon, Portugal.  This unused long size postcard, sent by my son and his wife, has a photo by Nuno Antunes showing a view of the cloister.  The monastery and the nearby Tower of Belém have both been a UNESCO World Heritage Sites since 1983.  The monastery features examples of Manueline architecture.  It is a major historical building in Lisbon.  The Tower of Belém on the bank of the Tagus River was built partly to protect the monastery.  The monastery has two floors with a vaulted design in a quadrangular layout containing religious and royal symbols.

The construction of St. Jerome’s began in 1501 and took 100 years to complete.  King Manuel I (1469-1521) originally funded the project with a 5% tax on selected commerce from Africa and the Orient.  The tax collected equaled about 150 lbs or 70 kilos of gold per year.  With such a sum of guaranteed funds architects were not limited to small-scale plans.  The King selected Hieronymite monks to serve in the monastery.  Their purpose was to pray for the King’s eternal soul and provide spiritual assistance to navigators and sailors who left from the nearby port as explorers of the world.  The monks did this service for more than 400 years until 1833 when their religious order was dissolved and the monastery abandoned.

As suggested by the use of a long card the cloister is vast at 180 x 180 ft or 55 X 55 m.  Each wing has six bays with tracery vaults.  The second level is recessed.  There are four inner bays resting on massive buttresses that form broad arcades.  The decorated cloister seen on the card has nautical elements and European, Moorish, and Eastern motifs.

The monastery has been restored and renovated several times.  Today the Maritime Museum and the National Archaeology Museum are both found within.  Portions of the buildings that make up the monastery as well as both museums are open to the public.

Postcard Thursday is taking the next two weeks off.  See you in November!
at 8:47 AM 1 comment:

If this is Thursday it must be postcards, 371 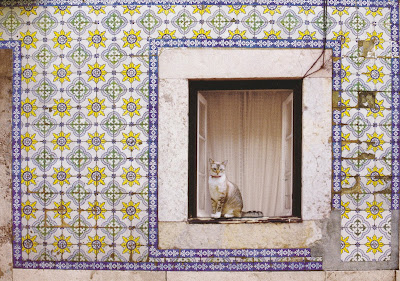 
The postcards this week come from Portugal and were shared by my son and his wife from their trip early this summer.  On the card above we see a cat sitting in a window, the outside of the building covered in tiles.  On the reverse of the card the photographer is identified as David de Abreu.

Painted tin-glazed ceramic tiles called Azulejos in Portuguese can be found on the exteriors, interiors, ceilings and floors of churches, palaces, houses, schools, restaurants, bars, railway and subway stations in both Portugal and Spain and some can be found in Italy as well where they are called Laggioni. The tiles are not only used for ornamentation but can also serve as temperature control in houses.

While some tiles have images or pictures on them most do not but instead have designs in geometric shapes and patterns or floral motifs that reflect Moorish influence.  The Portuguese adopted a Moorish tradition and covered walls completely in azulejos.  The second card, seen below, has examples of several different tile designs.  This card was produced by Casa dos Postais. 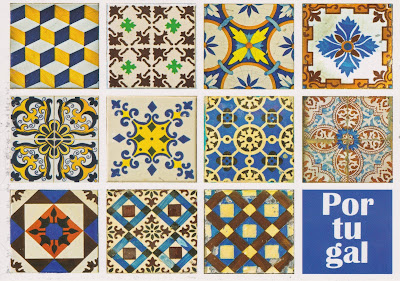 I noticed that many of the tiles have some blue and wondered if that might have a psychological cooling effect.  Yellow is also a color found on many of the tiles.  Following the great earthquake of 1755 the Marquis of Pombal was put in charge of the rebuilding efforts.  He chose to use tiles, many with small devotional panels, as protection against future disasters.

Vandalism, theft and simple neglect of tiles have caused problems.  In an effort to preserve the cultural heritage it has been forbidden to demolish buildings with tile-covered façades in Lisbon since 2013.  Prior to that law, many tiles were removed or stolen from buildings and ended up being sold to unsuspecting tourists.  A new law was enacted in 2017 to prevent the demolition of tile-covered buildings not only in Lisbon but across Portugal.  In addition to these efforts the city of Lisbon has also developed a "Banco do Azulejo" or "tile bank" that stores and collects tiles from previously demolished buildings.