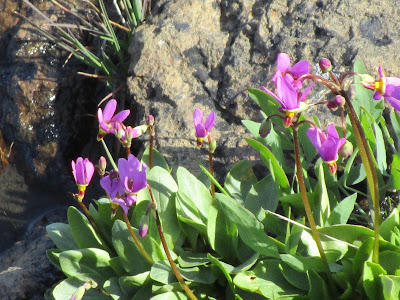 
Although there is still snow in the mountains, most of the ski resorts have shut down for the season.  We have hung up the skis and put out the hiking boots.  This week was the first hike of 2018 for us.  We went to Washington Park in Anacortes, Washington.  In the past we have gone to the Happy Hikers Spring Fling, a potluck picnic as well as a hike held at this park; however, this year we couldn’t go on the day of that event.   A visit to Washington Park has become an annual excursion much anticipated for the chocolate lilies, fawn lilies, calypso orchids and many other flowers that bloom this time of year.

We knew where the lilies were from last year and were not disappointed.  The chocolate lilies were budded and almost in full bloom.  The fawn lilies were perhaps at peak bloom and we saw hundreds of them.  We counted 27 calypso orchids.  Yellow monkey flowers were plentiful as was the pink sea blush.  The white death camas was up and a few of the common blue camas were also. We even saw a coralroot popping up. 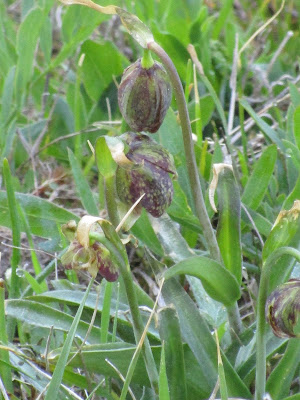 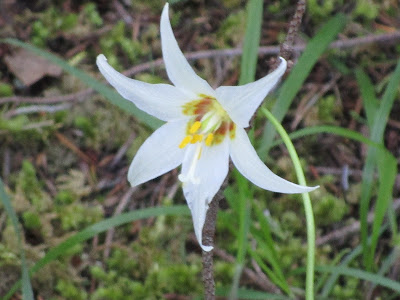 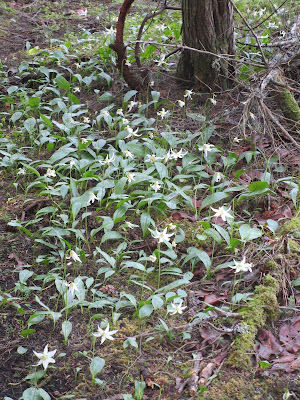 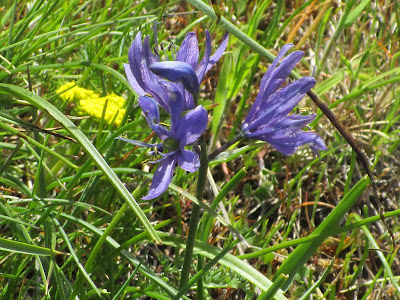 Blue Camas and a small patch of Spring Gold 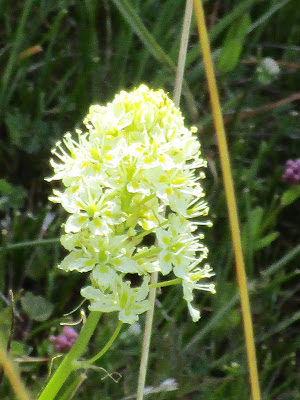 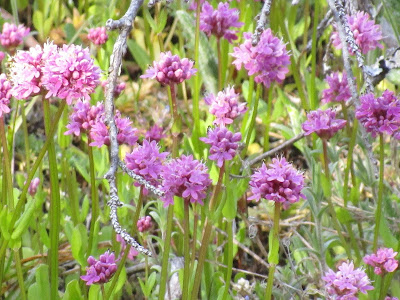 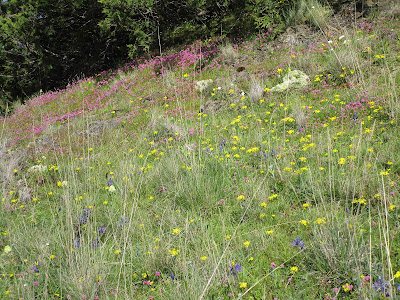 Sea Blush, Spring Gold, and Blue Camas on the hillside 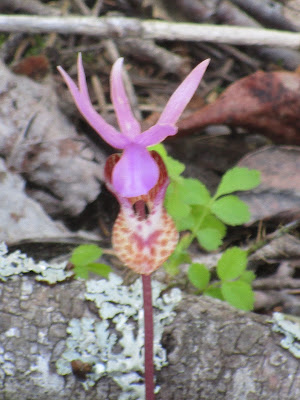 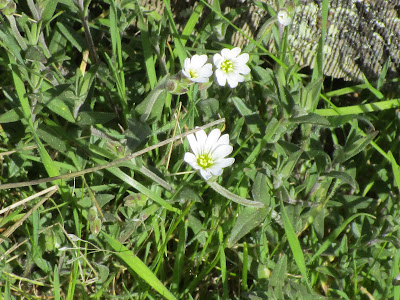 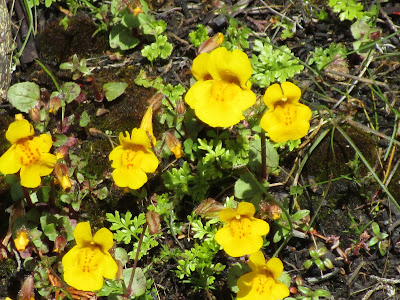 There are several walking options beginning with a paved loop that has branches off in many different places to dirt trails weaving in and out of the woods with views of the water. 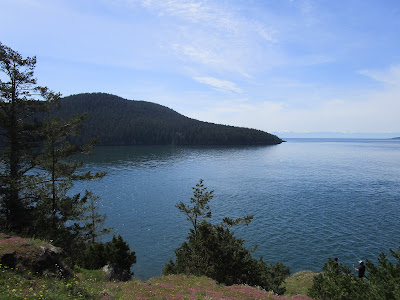 Water view from along one of the side trails

We also heard many birds, saw a chipmunk, a rabbit, a raven, and a sea gull that stayed close to our lunch area hoping for a tidbit but we didn’t share. 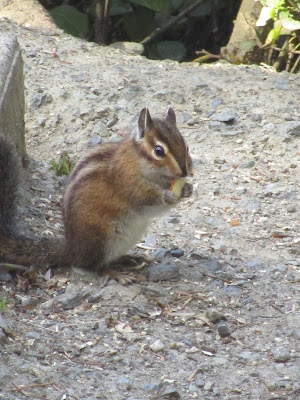 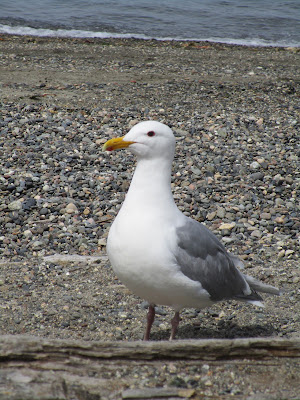 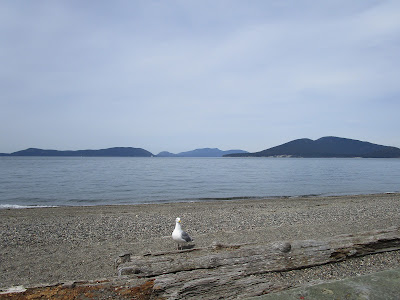 We had our lunch by the beach and this sea gull joined us.  It stayed nearby the entire time we were there and only left when a small boy and a dog walked along the beach, too close for comfort. 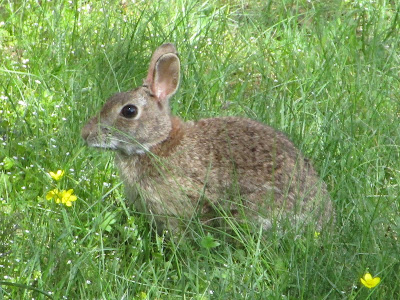 It is hard for me to take pictures when we ski since my camera does not like the snowy, cold outdoors and I have poles and gloves that get in the way.  Hiking is another story.

If this is Thursday it must be postcards, 348 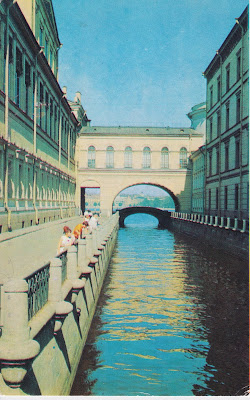 Here are two more postcards sent to Bob from Russia to share this week.  The card above has a photograph of the Winter Canal dug in 1718-1719.  It is one of the shortest canals in St. Petersburg at 748 feet or 228 meters long.  It is about 66 feet or 20 meters wide.  I. F. Dunker, sculptor, designed the railings that were added along with the granite embankment in 1782-1784.  The arch connects Old Hermitage and Hermitage Theater built by architect Yury Felten.  This canal was originally named Old Palace Canal but beginning around 1780 townfolks began calling it the Winter Canal and in 1828 it was officially renamed the Winter Canal.  There are three bridges that cross the canal.

The second card, seen below, is the Griboyedov Canal originally called the Catherine Canal after the Empress Catherine the Great.  It was renamed during the Communist rule after a playwright and diplomat, Alexander Griboyedov.  The canal was constructed in 1739 along the Krivusha river.  Later, in 1764-1790, the canal was deepened, the banks reinforced and covered with granite.  This canal is 3 miles or 5 kilometers long with a width of 105 feet or 32 meters.  There are 21 bridges that cross the Griboyedov Canal.   This is the canal that features in the book Crime and Punishment by Fyodor Dostoyevsy. 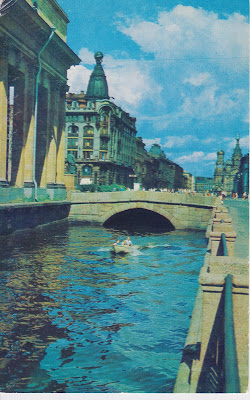 The outer envelope came with several stamps, two are shown below.  The first one is dated 1976 showing the Sputnik orbit around the earth. 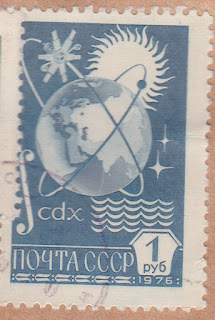 This second one, a 1971 "Brooch Rose" made of platinum and diamonds, made for the centennial of Lenin's birth. 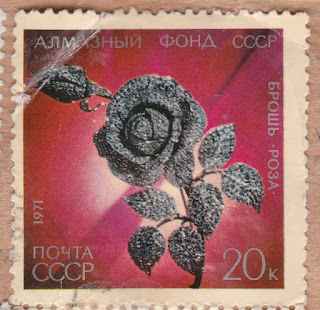 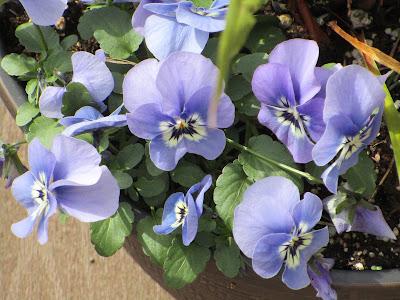 My aging computer is doing some strange things.  Beware of the Rug lost its nice wallpaper background and I couldn't get it back, I think because the computer cannot take the most recent operating update.  Therefore, I am experimenting with the backgrounds and formats that will work.  This one might be too blue and not easy enough to read but I will keep it up for a few days or weeks to see how it goes.  I'll be trying a few others until I get one I like as well as the old version.  Meanwhile, the pennies are going into a jar designated for a new computer.
at 7:44 PM No comments:

If this is Thursday it must be postcards, 347 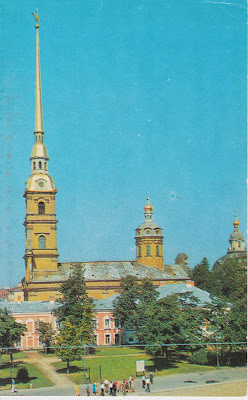 Here are two more unused postcards sent in the early 1970s to Bob from St. Petersburg, Russia.  Both cards show the Peter and Paul Fortress founded by Peter the Great and built from 1706 to 1740 using designs by Domenico Trezzini.  From the air one can see the star formation of the fortress. 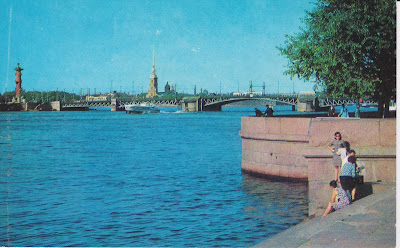 Peter and Paul Fortress as seen from the river, St. Petersburg, Russia

The Fortress is located near the north bank of the Neva River on Hare Island and over looks sandy beaches although the beach is not in the picture on this card.   It was originally built to protect St. Petersburg from Swedish counterattacks but it never was used for that purpose.  The six bastions were first hastily constructed of earth and timber and then later rebuilt in stone.

The Peter and Paul Cathedral, shown on the first card above, features a 402 foot or 122.5 meter tall bell-tower and is topped with a gilded angel.  This cathedral is the burial place for all Russian Tsars from Peter I to Alexander II except Peter II and Ivan VI.  Nicholas II and his family were re-interred in the side chapel of St. Catherine, in 1998 the 80th anniversary of the deaths.

In the 1920s it was used as the city garrison and as a prison for mostly political prisoners by the Bolshevik government.   Rebuilt in 1870 and known as the “Russian Bastille” the Trubetskoy Bastion was the main prison block.   Several well-known people, such as Fyodor Dostoevsky, Maxim Gorky, Leon Trotsky, and others, were held in this prison.  One of the prisoners, the anarchist, Prince Peter Kropotkin, escaped from the fortress in 1876.  Although it was believed that conditions in the prison were terrible and rumors abounded about frequent torture, malnutrition, overcrowding and other horrors in reality it was far less brutal than the public perception.  No more than 100 prisoners were held at any given time and most had access to what might be considered luxuries like writing materials, literature, and tobacco.

In 1917, during the Russian Revolution, mutinous soldiers attacked the Fortress and the prisoners were set free.  At that time hundreds of Tsarist officials were incarcerated in the Fortress.  By 1924 most of the site was converted to a museum and is today the State Museum of Saint Petersburg History.   The Gas Dynamics Laboratory was added to the site in 1931.  Much damage occurred during World War II bombardments when the city was under siege by the Germans.  Today it has been restored and is a major tourist attraction.

The postcards arrived in separate envelope with a letter.  That envelope had an interesting stamp.  The stamp below is one in a set of six stamps issued in 1977 featuring Arktika-class nuclear-powered icebreakers.  Built between 1975 and 2007 four Arktika-class nuclear-powered icebreakers are still in service today.  Icebreakers have multiple uses from breaking ice and making way for cargo ships to scientific expeditions to tourist cruises. If this is Thursday it must be postcards, 346 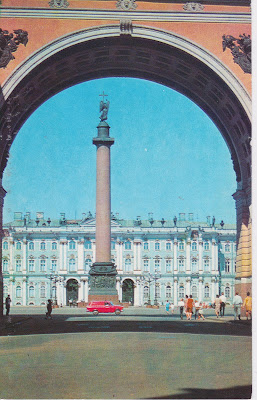 The Alexander Column in St. Petersburg, Russia is featured in this photograph on an unused postcard sent to Bob many years ago.

The column is named for Emperor Alexander I of Russia who reigned from 1801 to 1825.  It is located in the Winter Palace Square and stands over 155 feet or 47.5 meters high and is topped with an angel holding a cross.  The face of the angel is said to have resemblance to Emperor Alexander I.

Constructed between 1830 and 1834 the column is made of a single piece of red granite shipped from Virolahti, Finland.  The granite was transported via a specially designed barge that could haul the weight (661 tons) and the length.  It took 3,000 workers to erect the column less than 2 hours to set it in place on the base.  No extra attachments to the pedestal were needed to hold the column in place, as the weight alone is sufficient to set it securely in place.  There is a rumor that a chest or box of the silver commemorative coins designed and struck in 1834 was placed in the foundations.

For additional information and photographs, see:


https://en.wikipedia.org/wiki/Alexander_Column
at 8:47 AM No comments:

If this is Thursday it must be postcards, 345 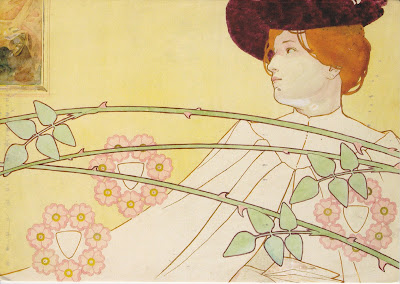 Today’s postcard once again was sent from my generous friend who lives in Italy. The card with an illustration by the Czech print maker, designer, illustrator, painter, typographer, and teacher, Vojtěch Preissig (1873-1944) was found at an Art Nouveau exhibition in Trieste.  The original painting is 42.2 X 57.8 cm the closest US standard size would be about 16” X 20.”

Preissig was born in northern Bohemia and moved to Prague when he was 11 years old.  He studied art and architecture while in Prague.  In 1897 he moved to Paris where he worked with a Czech artist, Alphonse Mucha.   Much of Preissig’s early work was influenced by Japanese art and symbolism.  He moved back to Prague in 1903, started a graphics studio and published a book on etchings and engravings.  The graphics studio was not financially successful so he moved to the United States in 1910 where he worked as an art instructor.  He taught at Columbia University, the Art Students League of New York, and then taught graphic arts in Boston in 1916 at the Wentworth Institute.  He also designed recruitment posters for the United States armed forces.

Preissig and his daughter supported the Czech resistance in both World Wars.  He remained in the United States until 1930 and then returned to Europe where he was arrested in 1940 for his work making posters for the resistance.  He died 11 June 1944 in Dachau concentration camp. 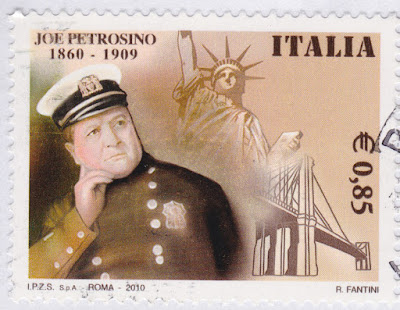 This stamp features Joseph Petrosino a New York policeman who was a pioneer in fighting organized crime.  He had a colorful career and knew several famous people.  He went to Sicily on a secret mission to ferret out a long list of Italian criminals who had moved to the United States.  The story of his assignment was accidently leaked and in 1909 just after arriving in Palermo, Petrosino was lured into a trap where he was shot to death at age 48. 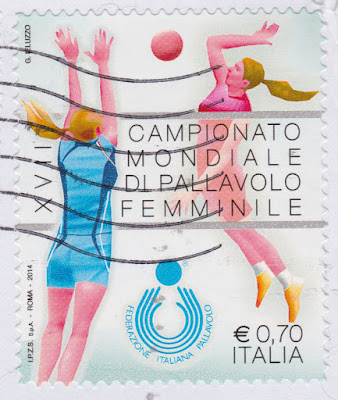 The last stamp is very colorful and commemorates the annual Battle of the Oranges a festival held in Ivrea, a city in Northern Italy. 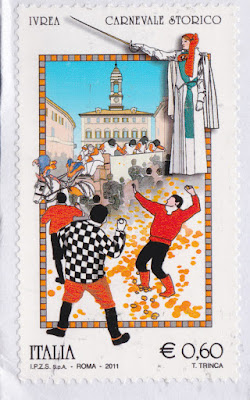 Traditionally oranges, rotten or otherwise, are tossed between organized groups.  While the origins of the festival are not clear it is thought to be a reenactment of a historical event from the 12th century.  The oranges are in place of the original rocks and weapons that were used in that battle.   Rows of orange crates are stacked up along the streets as ammunition for the mock battle.  It is called the largest food fight in Italy!  The opposing teams dress up for their parts.  The stamp shows one team member with orange top and black pants the opposing team member dressed in orange pants and a black & white checked top.

Once again, thank you to my friend for sharing the postcard and the stamps.