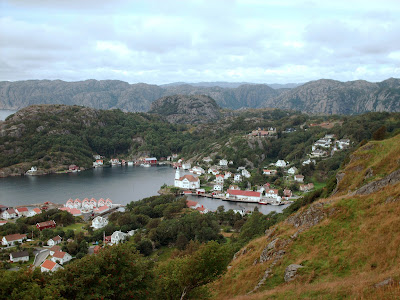 On 15 February 2012 I posted information about my grandmother’s brother, John Mikalsen Hornnes, and his wife, Lydia Gabrielsdatter Marstad.  Recently I heard from Stian Søvik with more information about Lydia’s family.   Stian sent this beautiful photograph of the community of Hidra, Vest Agder, Norway that includes the church where Lydia and John were married, seen in the central portion of the picture.  As it turned out his wife’s great grandmother, Saldine Olava, a sister to Lydia, was also married that day in that church to Frederick Leonard Bøckmann.  Both Bøckman and John Hornnes worked for the railroad and were probably friends as they stood witness for each other at the weddings.  Also as witness for both couples is John’s older brother, Gunnar Mikalsen Hornnes. 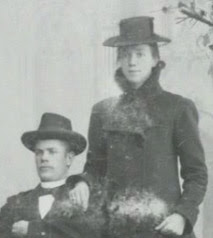 I think this photo was taken about the time John and Lydia left Norway for America and could be dated about 1901.

It would be nice to know which sister it was that lived in Boston, Massachusetts and helped Lydia when she became so ill and the exact date that Lydia passed away.  It is possible to narrow the death year to between 1908 when Sadie, Anna, and Lil Anna last saw Lydia and 1910 when the U.S. Federal census shows John as widowed.  It may prove to be difficult to discern the sister’s name since women in the United States took their husband’s surname and most of the records are indexed by surname but I am searching and will post an update if more information can be uncovered.  Below is what I know so far about Lydia’s family.

Her father, Gabriel Johan Sivertsen Marstad, was born or christened on 23 September 1836 in Hidra while the family was at Marstad.  His father was Sivert Gabrielsen Marstad and his mother was Gunhild Torine or Tobine Corneliusdatter.

Her mother was Olene Elisabet Olsdatter born or christened on 9 June 1836 at Hidra while the family was living at Ulland.  Her parents were Ole Johannes Salvesen Ulland and Else Malene Larsdatter.

Gabriel and Olene were married at Hidra on 3 November 1859.  Their children:

Olene was 44 years old when the last child, Gabriel, was born.  I looked a bit farther in the church register to see if there was another child but stopped after 1884 because she would have been 48 years old and unlikely to have another child beyond that year.

There are some lovely photographs of Hidra and the church, inside and out, at this link:

Thanks to Stian for contacting me and letting me share the picture.  I always appreciate hearing from blog readers and it is fun to make new connections to the family history.

I had just posted this when I realized it was easy to figure out which sister it was who lived in Boston, Massachusetts.  Stian sent me a list of the siblings he knew of but he did not include Tobine Severine who was born in 1871.  Tobine married Reinert or Reynold Johnson (recorded in the Hidra parish register as Jonasen) on 27 April 1891 in Hidra and left for America the same year.  They lived in both Massachusetts and later in Queens, New York.  They were living in Melrose a suburb of Boston where John and Lydia had moved to after Lydia became ill in 1901.  Tobine and Reinert had seven children but only five survived.  The children:  Ruth, born 1895; William, born 1898; Wm. C., born 1899; Joseph born 1901; Ester, born 1905; Ester Pauline (married name Rylance) born 1906 died 1955; and Grace born 1910.  I have sent a query to Ancestry.com and will post additional information if I can at a later date.