If this is Thursday it must be postcards, 74

The photograph of the city of Lille in Flanders on the postcard shown above looks as if it dates from the 1920s but the message on the reverse (see below) is dated 22 September 1954.  The title says it is “Le Thèâtre et la Nouvelle Bourse” with Louis Marie Cordonnier (1854-1940) listed as architect.  Les Arts Photomecaniques of Paris and Strasbourg published the card.  The stamp is very pretty and was issued in honor of Molière (1622-1673) the famous French playwright and actor. 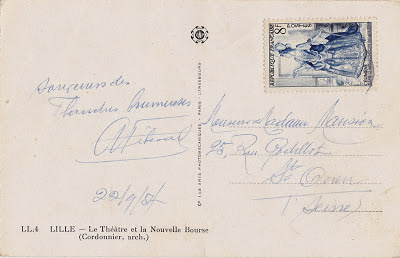 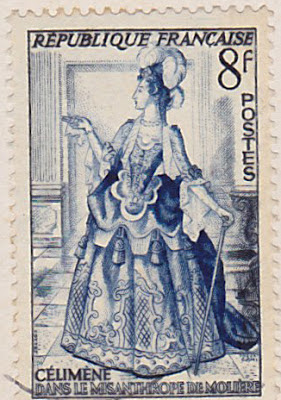 Close up of the stamp issued in honor of Molière

My friend who found the postcard and sent it to me also included some notes about the buildings and the city that I appreciate very much and was delighted to receive.  Lille is the largest city in northern France in the area identified as French Flanders and is the capital of the region known as Nord-Pas de Calais.  It is located on the Deûle River near the border with Belgium.

The two buildings featured on the card are the Opera House and what are now the Chamber of Commerce and also a Post Office but was once the Stock Exchange.  Little has changed in the square, according to my friend, except that it is now a pedestrian only area with no cars allowed making it a pleasant place to take a stroll.  The Opera House was built between 1903 and 1914, however, my friend said that it has an 18th century feel with the interior more in the Italian style with red seats, golden decorations and beautiful paintings on the ceiling.  The Chamber of Commerce building was built 1910 to 1921 and is in the neo-Flemish style.  The photo on the card was probably taken shortly after the Chamber of Commerce building was completed.   Glimpses of 17th century houses can be seen on the right and left sides of the card.  These houses are still there today and are the entrance to the “old city.” 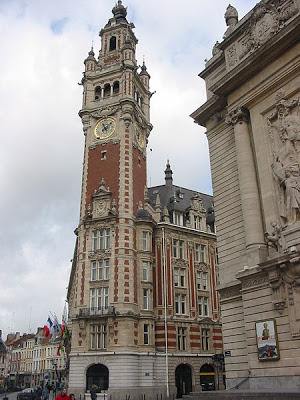 There is much information available about the history of Lille and I have put some links at the bottom for those who might be interested.  According to the legend of Lydéric and Phinaert the city was founded in 640 but actual records date from 1066.  The name comes from “the island” (insula or l’Isla) because the area was at one time a marsh with a castle built on dry land in the middle.  As a person with Nordic roots I was interested to see that the Vikings penetrated this area between 830 and 910.  The Count of Flanders controlled Lille as well as other areas.  The city is rich in medieval history with wealth and poverty living side by side.  There were outbreaks of the plague, booms in the textile industry, and Protestant revolts.  In more modern times the city has been buffeted by the aftermath of the French Revolution, both World Wars, and the Great Depression.  Austrian cannonballs lodged in the façade of buildings during a siege following the Revolution were not removed and can still be seen.

As always my thanks for the postcard and the notes.