If this is Thursday it must be postcards, 73 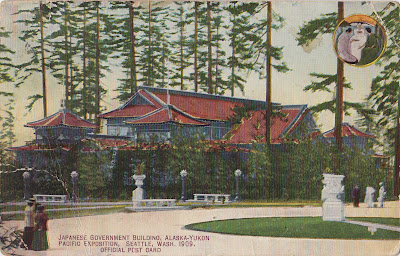 It has been a while since I posted something from the Alaska Yukon Pacific Exposition held in Seattle in 1909.  The building shown on this postcard above was sponsored and funded by the Japanese government.  Another exhibition on the grounds was built with funds from local Japanese Americans.  There were many more Japanese Americans than Chinese Americans living in the area during this time.   As noted in a previous postcard Thursday the Chinese exhibit was funded entirely by the local population.

One of the aims of the Alaska Yukon Pacific Exposition of 1909 was to encourage trade with Asian countries.  It was hoped that Seattle would become a center for trade with these countries opening their markets to products made in the United States.

I did not realize how controversial this plan to promote trade was until I started investigating the exhibits at the 1909 Fair.  While the U.S. federal government was promoting the trade with Asian countries there was widespread prejudice against Japanese, Chinese, and Filipino people within the United States.  The West Coast states even proposed laws that included school and housing segregation, prohibitions of property and gun ownership as well as prohibition of Japanese directors of corporations.  These state laws would have caused considerable difficulties for the federal government if they were passed making a struggle between the desire for trade and the states that sought to pass anti-Japanese legislation.   One suggestion advocated the posting of bonds by visitors from Japan to ensure that they would return to Japan after the Fair.   That idea was quickly stopped.  There was an incident involving the Japanese boycotting American goods in response to these proposed laws.  Fortunately Japan decided the laws were not a reflection of the American people but of the legislatures so a diplomatic crisis was averted.

Some of the goods promoted at the Japanese Government exhibition included things like, tea, cultured pearls, enamel and cloisonné items, musical instruments and silks with manufacturing displays.  Japan Day at the Fair was September 4th and included two parades, the first held in the International District the second on the Fair grounds.  The parades included 14 decorated floats and 50,000 lanterns.   The parade on the Fair grounds also included evening fireworks. This previously posted card shows the Tokio Café, one of the more popular places at the fair.  It was located at the end of the amusement area known as Pay Streak. 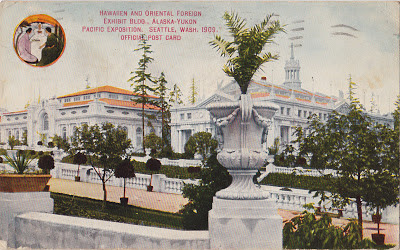 Yet another exhibit was housed in the Oriental Foreign Exhibit building located near the Cascades.

Additional information is available at: