If this is Thursday it must be postcards, 75 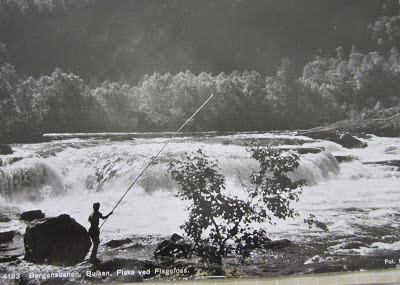 I had to crop this postcard a little bit because it was in a “magnetic” photo album [note to self and others:  Never, never put photos and cards in magnetic albums] and it could not be removed without damaging it.  The picture shows fly-fishing in the Vosso River at Flagefoss, Hordaland, Norway.   The title says that this spot is located on Bergensbanen (the Bergen rail line) between Bergen on the west coast of Norway and Oslo the capital city to the east.   The card was found in the scrapbook collection of Dick Thompson that I was able to look through when I visited his daughter last summer.   It is probably dated from his trip to Norway in the 1950s.  The photographer is identified as Normann.

This map from Wikipedia shows the 308 mile (496 kilometer) route the train follows during the 7.5 hours it takes to get from Bergen to Oslo.  Originally in 1883 it was a narrow gauge rail from Bergen to Voss but in 1909 the route was extended over the mountains to Oslo and the entire line was converted to standard gauge.  Parts of the line are over 4,000 feet (1200 meters) above sea level making it the highest mainline railway in Northern Europe.  Flagefoss is located near Voss.

There is an excellent article by Arthur Oglesby that appeared in the May 1976 Field and Stream magazine that talks about salmon fishing in Norway, most particularly fishing along the Vosso River and this spot shown on the postcard called Bulken and Flagefoss.  The river has two main sources, is not glacier fed, but is dependent on winter snowfall and summer rain.  Voss is located near Bergen and is also not far from Stalheim.  (For more about Stalheim see Postcard Thursday #58, 27 September 2012.)  The river has a series of pools and rapids that end at the big waterfall called Flagefoss.   Looking at the falls pictured on the card one can almost hear the water rushing over the rocks and feel the spray.  The entire route along the rail line has gorgeous scenery.

It is the size and quantity of the fish that are astonishing.  Wooden platforms were built to enable fishermen to use big 20-foot fly rods like the one in the picture.   Fish weighing 36 pounds or more are not uncommon and fish less than 20 pounds are sometimes referred to as “small fry.”  I am not sure when they first started weighing the fish but in 1902 a 58 ½ pound salmon was caught here.  There are some stories of fish that were lost that could have weighed as much as 70 to 90 pounds.  One such fish that was hooked and later broke free pulled the fisherman for three miles before it got away.  Although the fisherman had caught several other large fish when asked how he did that day he glowered and said “Very poorly.”  His friend had caught a 65 pounder and a 52 pounder.

The full article titled:  Norway’s Trophy River by Arthur Oglesby can be found on Google books at this link: