If this is Thursday it must be postcards, 309 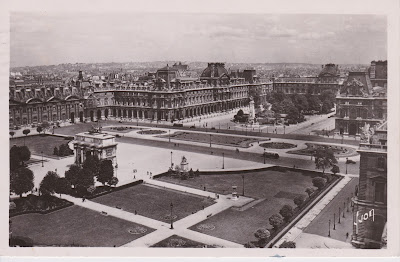 There are certain photographers and postcard publishers that I often look for when searching for new cards to add to the collection.  Yvon is one such photographer who also published postcards.  It was a surprise and a delight to find this used black & white Yvon card in a local antique mall.  The picture is of La Place due Carrousel in Paris and it is part of the collection of photographs known as Paris . . . En Flanant.  The message is dated October 24, 1951.  To see some other postcards by Yvon that have appeared in the blog, use the Search option with the key word Yvon.

This public square is located in Paris directly between the Louvre Palace and the Tuileries Garden at the eastern edge. At the western end of the gardens is the Place de la Concorde.  Louis XIV used this space for equine military drills in 1662, hence the name “carrousel” for a type of military dressage.

During the 1700s the Tuiliers Palace occupied part of the square.  During the French Revolution in June 1792 King Louis XVI and his family were held under surveillance in that palace and later in August of 1792 the guillotine was erected in this square where it stayed until May 1793.  During the time between May and August of that year 35 people were executed there before the guillotined was moved to Place de la Concorde.  Thousands of people, including the King and Queen, were eventually executed using the guillotine during the Reign of Terror.

The Tuileries Palace was looted and damaged in 1848 and in 1871 orders were given to torch the remains of palace.  Incendiaries such as petroleum, liquid tar and turpentine were used.  The fire lasted 48 hours and completely consumed the palace.  The ruins stood for another eleven years and were finally demolished and removed in 1883.  Once the ground was cleared the area was again used as a public square.

In August 1793 a wooden pyramid was constructed where the guillotine had stood in the Place du Carrousel as a tribute to Jean-Paul Marat (1743-1793), a French political theorist, physician and scientist who became a radical journalist advocating basic rights for the poorest during the Revolution.  Today the famous glass pyramid, designed by I.M. Pei, is in front of the Louvre and serves as the main entrance into the museum.  At first I wondered if the glass pyramid might be a more permanent monument to Marat but it turned out to not have a connection. The glass pyramid replaces the older entrance in order to accommodate the large numbers of visitors coming to the museum.

Another prominent features of the square is the Arc de Triomphe du Carrousel.  It was built between 1806 and 1808 to commemorate Napoleon’s victories and is about half the size of the more famous and larger Arc de Triomphe de l’Étoile.  It is still imposing; however, at 63 ft (19 m) high, 75 ft (23 m) wide and 24 ft (7.3 m) deep.  The arch has bas-reliefs, statuary, and Corinthian columns.  A statue of Peace riding in a chariot is perched atop the center of the arch.  Like several other small arches this one is a derivative of the Roman triumphal arches.