If this is Thursday it must be postcards, 310 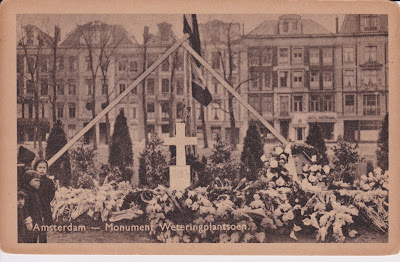 
This unused postcard looks to date around the late 1940s or early 1950s.  Aside from the title at the bottom left there are no identifying numbers, credits, or printer/publisher listed.  The coloration is sepia toned and the photograph shows a memorial of flowers.  This was one of several cards found in a jumble of others in a shoe box in a local antique-secondhand store.

Weteringplantsoen is located at the crossroads of the Vijzelgracht and the Weteringschans between Leidseplein and Frederiksplein in Amsterdam, Netherlands.  The square, park or as it is called in the guides, plantation opened as a public playground in 1880.  Today it is the oldest playground in Amsterdam.  The park is divided into three parts, two gardens and a roundabout.

Thirty World War II resistance fighters were executed in the First Wetering Plantsoen in 1945.  In memory of those who died at that time a ring of flowers is erected there each year on 4 May (shown on the card).  In 1954 the sculptor, Gerrit Bolhuis, created another permanent monument wall that also has a dead soldier with a handset in his hand.  Wikipedia photos from 2011 show a lush green garden in the heart of the city.  Due to increasing traffic at this site a roundabout was installed here also.

There are several other pieces of artwork in this park, including some with lines of poetry; a bust of the columnist Simon Carmiggelt; and a bridge over the Singelgracht.  From 2003 to 2013 the North-South Line of the subway connection construction was ongoing under the plantation.

Gerrit Bolhuis (1907-1975) was a Dutch sculptor who specialized in World War II resistance and liberation monuments.  His works can be found in Amsterdam, Epe Beverwijk, and Winterswijk.


[Note:  It is possible to select the translate option for the two links from the Netherlands]
at 8:45 AM