If this is Thursday it must be postcards, 308 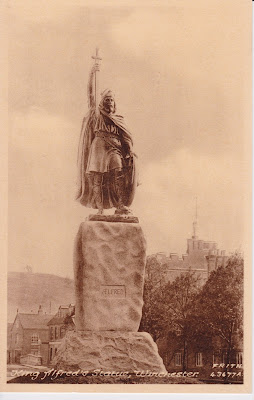 This sepia toned real photo postcard is unused with a divided back.  The card is attributed to F. Frith & Co. Ltd. Reigate, England.  The card has an identifying number at the lower right of 43677A.

Francis Frith (1822-1898) a successful grocer and printer became interested in photography and started a photographic studio in Liverpool in 1850.  He was also one of the founding members of the Liverpool Photographic Society in 1853.  He traveled to the Middle East several times including at least once to Egypt with large cameras, 16” X 20.”  He used a wet plate or collodion process that was a new major technical achievement especially in hot and dusty environments to develop his photos.

During his travels he kept a journal of the difficulties encountered and noted some people wanted to see photographs of other parts of the world and with a goal in mind to provide such pictures he eventually established Francis Frith & Co. in 1859.  Once back in England with his photographic studio running he embarked on a project to take pictures of all the towns and villages in the United Kingdom.  At first he took all the photos himself but as his success increased he hired people to help and eventually started the postcard company.  It only took a few years before over two thousand shops throughout the U.K. were selling postcards printed by his company.  He married Mary Ann Rosling and they had five children.  After his death in 1898 his family continued the firm until it was sold in 1968 and then closed in 1971.

The statue featured in the picture on the card is of King Alfred the Great (849-899) by Hamo Thornycroft, erected in Winchester in 1902.   William Hamo Thornycroft was born 1850 and died in 1925.  His father, mother and grandfather were all sculptors.  He is responsible for some of London’s well-known statues and a leading artist of the New Sculpture movement.

Since no portraits of the king exist this rendition is solely the artist’s interpretation.  King Alfred’s aims for his country were to rid the land of pagan Norsemen and to advance Christianity among his subjects.  The piece has a symbolic cross on the hilt of the sword and the shield at his side is a reminder that he was the protector of his people.  He is standing on a half hewn monolith that rests upon a grass mound to represent the age in which he lived.  The statue is 2 ½  times larger than life-size and stands 40 feet tall.  The pedestal weighs 40 tons.