Silver Falls and Grove of the Patriarchs, 2017 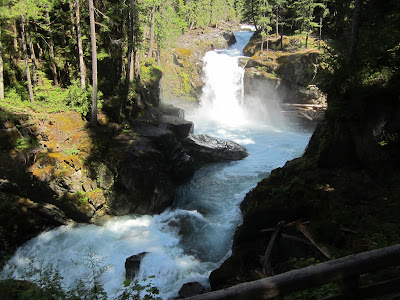 This past week we went to Mt. Rainier National Park for the first time this hiking season.  Many of the trails in the park still have too much snow and are not yet open for hiking.  However, the hike to Silver Falls and Grove of the Patriarchs is lower elevation and mostly free of snow.  There are campsites and an information ranger station as well as the hiking trails.  No dirt road with bumps and dust to contend with and a nice restroom at the trailhead with running water and flush toilets.


We hiked to Silver Falls and then continued on to Grove of the Patriarchs encountering only about 12 other hikers on the Silver Falls portion of the trail going in and on the way back we counted an additional 46.  There were probably at least 200 people on the Grove of the Patriarchs section.  There is another nice restroom there and a large parking area.  No dogs are allowed in the park and a Forest Service pass is required. 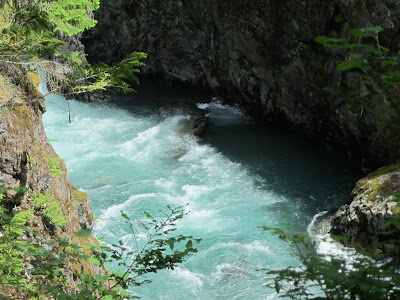 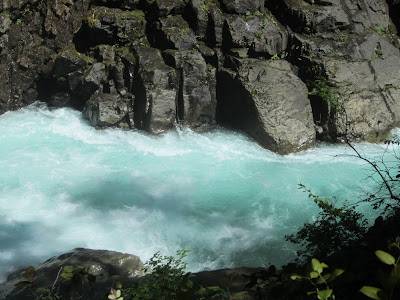 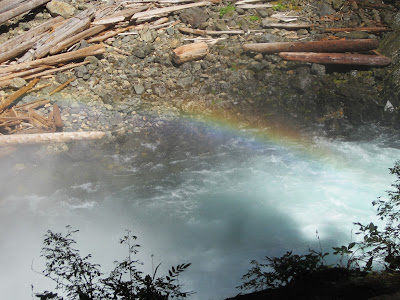 The falls are spectacular this time of year, very full of fast, roaring, beautiful blue-green water with spray catching the light and making rainbows.  If one goes past the falls and on to the Grove the trail winds up, crosses the street, and then continues on for another almost 1 mile. 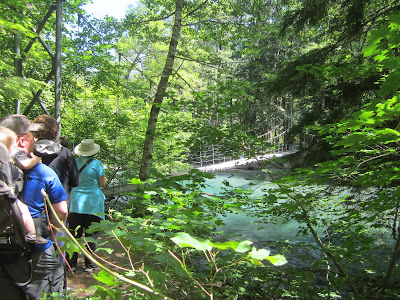 Suspension bridge over the river 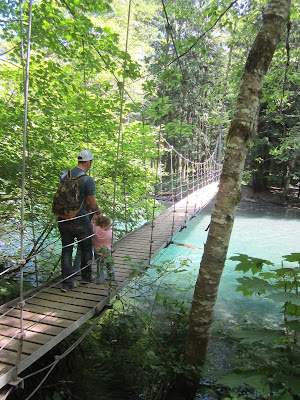 There is a suspension bridge over the river with a recommendation that only one person at a time should cross over.  There were long lines on both sides of the river of people waiting to cross.  Neither of us had ever seen so many people on that trail.  The difficulty was not that the bridge could not hold more than one person but that more people on the bridge at a time made it sway and ripple so walking was a bit unsteady. 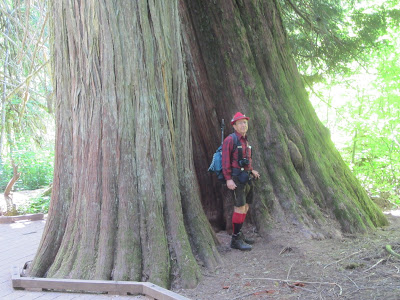 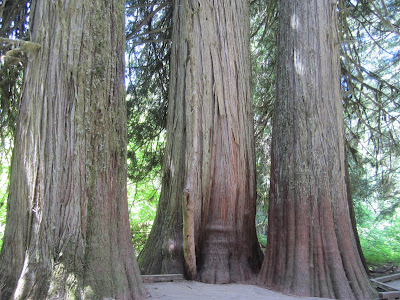 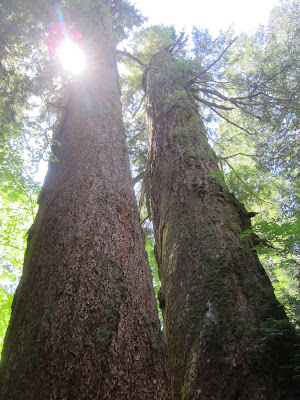 Bob and I went a short distance apart and after we had crossed several other people figured out that they could cross more than one at a time if they were careful not to rock the bridge too much.  The line moved a little faster after that.  There is a loop trail through the old trees and some benches where we sat and had a lunch.  After wandering through the big trees, some over 1,000 years old, we re-crossed the bridge and continued a little further on the trail. 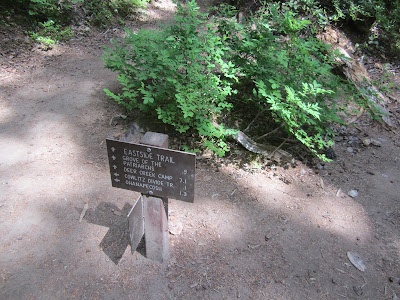 Our hike ended up about 6 miles round trip with approximately a 500 ft elevation gain.  There were plenty of families with young children on the Grove trail and a few on the Silver Falls portion. 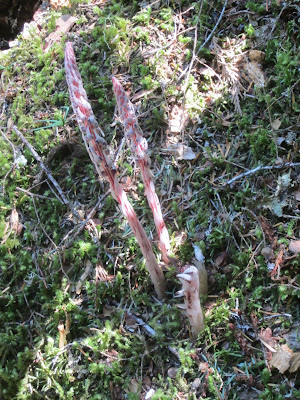 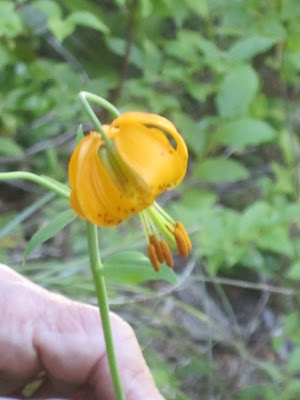 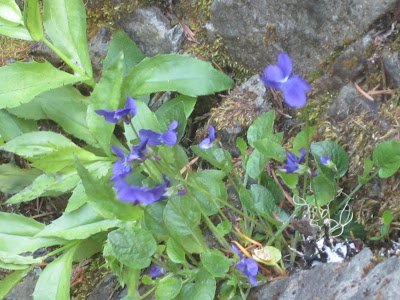 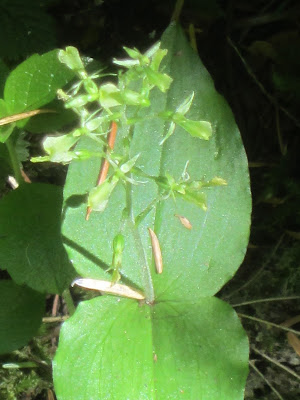 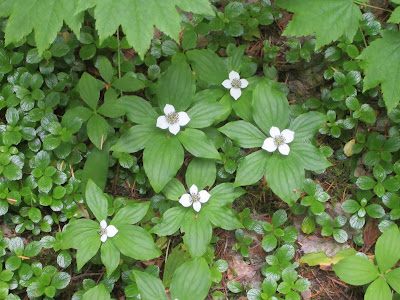 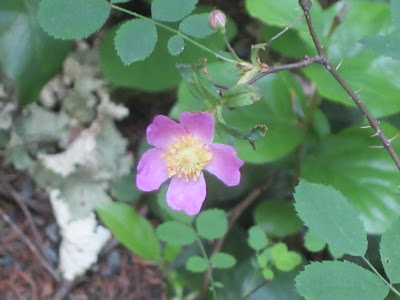 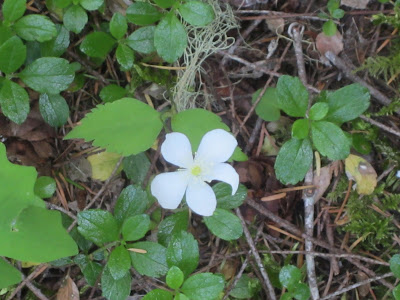 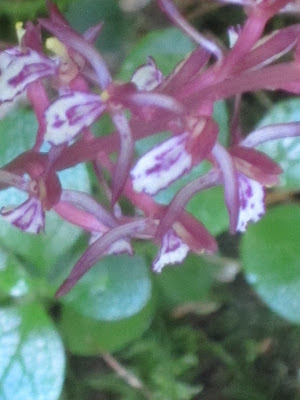 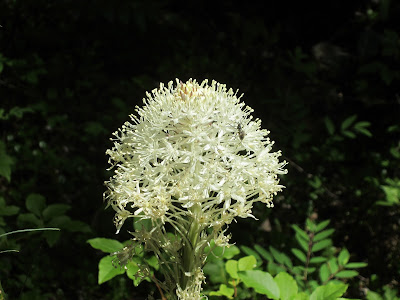 The first Beargrass of the season

We had some unexpected finds, such as candysticks, a tiger lily, coralroot, and a three-leaved anemone (something we had never encountered before).

A sad note, my trusty little Canon power-shot elph 100 was not focusing, as it should.  I had noticed for a while that the pictures were not as sharp has they had been and dark spots were showing up on the pictures.  We took it in to a camera shop the next day.  The verdict, dust in the lens hence the dark spots and no way to fix it.  The camera was done after 5 years and 32,000 pictures.  I picked up an almost identical newer version Canon power-shot elph 190 and hope it will last as long and work as well.  The photos from Silver Falls are still with the old camera, some close ups of the flowers did not turn out as well as hoped. 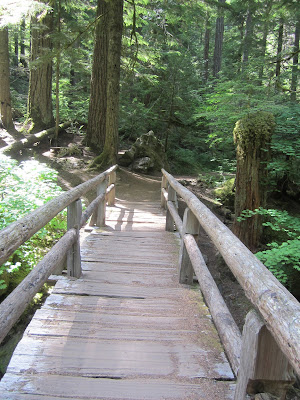 There were several of these wooden bridges over creeks 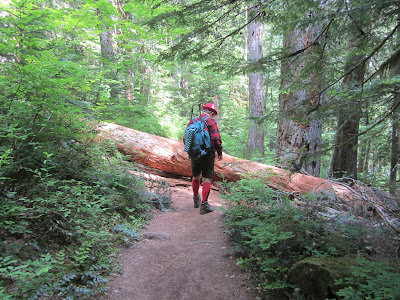 One downed tree that required a climb over 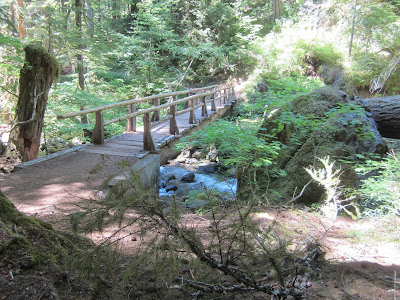 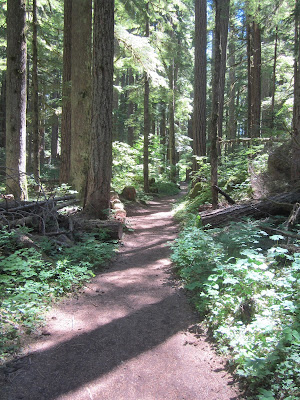