If this is Thursday it must be postcards, 306 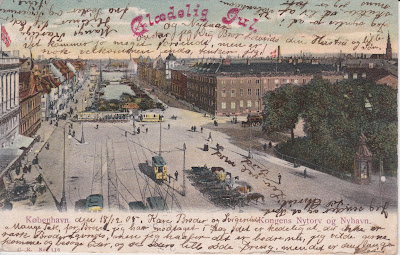 This postcard was sent from Copenhagen, Denmark as a Christmas and New Year’s greeting with the handwritten date of 18 December 1905 and postmarked at Fort Doge, Iowa when it arrived on 3 January 1906.  The scene depicted on the card is of Nyhavn or New Harbor and Kongens Nytorv or The King’s New Square.  Today they could hardly be called “new” as both were designed and build in the 17th century.   The used undivided back card, does have an identification code, C.R. No. 116, but does not have publisher or printer information.  The card has sparkly glitter glued strips on the roofs and across the bottom section of the harbor plus the equivalent of “Merry Christmas” stamped in red at the top center of the image.

Because the undivided back was to be used only for the name and address of the person receiving the card any message had to be written on the front of the card usually over part of the picture.  As can been seen there is a small margin at the bottom of the card where a message could be and was written.  In this case the message also spilled over to the sky portion at the top and partly into the street. The picture is interesting too, since it shows horse drawn wagons or carriages lined up and what looks like electrified trolley cars with tracks.

Nyhavn, seen at the upper middle on the card is lined with brightly colored buildings the oldest townhouse dates from 1681.  King Christian V had the harbor built by Swedish prisoners of war from the Dano-Swedish War 1658-1660.  It was the gateway from the sea to the old inner city and the Kongens Torv.  Ships unloaded cargo and fish here.  As the ocean going ships got larger the harbor was used more for small vessel freight.  Gradually ship traffic disappeared and the harbor was mostly deserted.  Looking carefully at the postcard it is possible to see the first temporary foot bridge built across Nyhavn in 1875.  That bridge was replaced in 1912 with the bridge currently used today.

The Nyhavn Society was founded in the 1960s with the aim of revitalizing the area.  The quay was changed to a pedestrian only area and a veteran ship and museum harbor was established.  Old carefully restored ships, now part of the Danish National Museum, can be viewed there.  Since that time it has become a popular spot for tourists.

Trivia:  The Danish author Hans Christian Andersen lived at No. 67 from 1845 to 1864 and then at No. 18 from 1871 to 1875.  The second house now has an Andersen themed gift shop.  There is a Memorial Anchor at the end of Nyhavn commemorating Danish officers and sailors who served during World War II.

Kongens Nytorv is a public square located at the end of the pedestrian only area.  It was another project of Christian V in 1670 as a major extension to the fortified city.  The square was cobblestoned with a garden inspired by what was done in Paris earlier.  Facing the square are the Royal Danish Theatre (1874); Charlottenborg Palace (1671) now the Royal Danish Academy of Fine Arts; Thott Palace (1683) now the French Embassy; Hotel D’Angleterre; and Magasin du Nord a department store.  Although the square and gardens were originally built in the mid to late 1600s they were rebuilt by Frederik V in 1747 and served as a ceremony ground for the King’s troops until 1908 when the square was re-shaped back to its original design.  The statue of Louis XIII of France at the Place de Vosges inspired a similar statue placed in the square of Christian V that is the oldest equestrian statue in Scandinavia (1688).  It was originally made of gilded lead but in 1939 it was recast in bronze.