If this is Thursday it must be postcards, 250 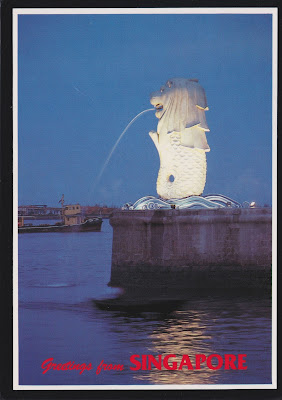 Here is a postcard from Singapore showing the White Merlion.  The card was printed in Australia by Colorscans and distributed by A & T International (PTE) Ltd with the photo by R. Ian Lloyd.  It is a used card but the date on the cancellation is not legible.  We can put the date around 1985 since that is when the insect series of stamps were issued.  The stamp on this card is the Potter Wasp, one of 12 insects in the set and one of the favorites.  This wasp takes its name from the mud used to build and shape the nest it forms.  Native Americans are believed to have patterned their pottery designs upon the mud nests constructed by the wasps which can be found all over the globe not just in Singapore.

Travel information says that the Merlion symbolizes Singapore’s beginnings as a fishing village.  It has the tail of a fish and the head of a lion the that represents the original name of Singapura or “lion city” in Malay.  The fountain built by a local craftsman, Lim Nang Seng, and originally located at the mouth of the Singapore River was unveiled in 1972.  When the Esplanade Bridge was completed in 1997 the statue could no longer be clearly viewed so in 2002 it was moved in front of the Fullerton Hotel overlooking Marina Bay in Merlion Park.  A smaller statue named Merlion Cub is also found in the park.  The cub stands about 6 feet tall (2 meters) and weights 3.3 tons (3 tonnes); the White Merlion is a little more than 25 feet tall and weighs 72 tons (70 tonnes).   There are seven authorized Merlion statues in Singapore with the largest, a gigantic 37 meters tall (121 feet), built in 1995 and located on the island of Sentosa.  It also has a gift shop and viewing galleries and is the only Merlion where people can follow an attraction trail to learn about the myth.

Singapore is an island city-state in Southeast Asia.  It was an outpost of the Sumatran Srivijaya empire with the Kingdom of Singapura established on the island as a trading port city in the 13th century.  In 1613 Portuguese raiders burned down the settlement and for the next two centuries it sank into obscurity.  British colonization started with the arrival of Thomas Stamford Raffles in 1819 and the opening of a British trading post.  The entire island became a British possession in 1824.  Prior to the arrival of Raffles there were about 1,000 people living on the island, mostly Malays and a few Chinese.  By 1860 there were more than 80,000 half that number were Chinese.  Many of the immigrants came to work in the rubber plantations and by the 1870s the island had become a global center for rubber exports.

During World War II the island was invaded by the Japanese and resulted in the British surrendering it.  After the war the British returned and maintained control until 1959 when it became self-ruled.  For a short period of time between 1963 and 1965 Singapore was joined to the Federation of Malaya.  Disagreements about politics, economic issues, and communal strife, including race riots in 1964, resulted in Singapore being expelled by the Malaysian Parliament.  Since 1965 the Republic of Singapore has been independent.  Singapore is a global hub for commerce, finance and transportation.

Singapore consists of 63 islands.  Densely populated in more modern times there has been a successful reclamation and greening policy to increase the size of the available land and add vegetation, parks and gardens.   Some of these projects have resulted in merging smaller islands to form larger islands.  Ten percent of the land has been set aside for parks and nature reserves. The city’s first prime minister, Lee Kuan Yew was called the nation’s Chief Gardner and since 1970 Singapore has been known as the Garden City.