If this is Thursday it must be postcards, 249 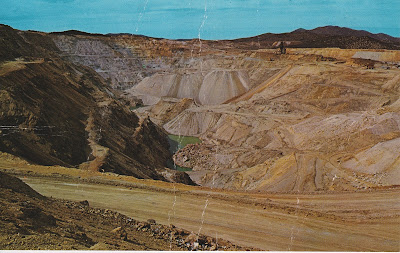 
Open pit copper mines such as the one shown on this postcard above are both ugly and beautiful.  Ugly because of the scars they leave on the earth and beautiful for the colorful striations of soil and ore that are exposed.  Ruth, the mine and a company town founded in 1903 for mining, is found in White Pine County, Nevada not far from the town of Ely.  The town is named for Ruth McDonald the daughter of the original mining claim owner.

Geor Mc Co., of Murray, Utah published the postcard with the photograph taken by George McLean.

Large-scale mining began in this district in 1907 and some mines are still operating today.  More than a billion pounds of copper were extracted from this area during the years between 1908 and 1978.  Today the annual production is around 120 million pounds of copper and 75,000 ounces of gold.  Although there are reserves of both copper and gold from the mines the actual mining is predicted to have only a few more years of full production.

Years ago our family used to make “pilgrimages” to Utah and California to visit aunts, uncles and cousins.  We tried to vary the route by going different ways.  Sometimes that meant crossing the Idaho panhandle, going into Montana and then down to Utah, making a big loop crossing Nevada and ending up in northern California.  When we took the roads through Nevada we would go either across the Bonneville Salt Flats and through Elko, then on to Reno or the other way was to go south of Salt Lake City to Delta and across to Ely then along the stretch of highway known as the “Loneliest Road” to Reno and finally into California.  Our travels took us by the Kennecott copper mines located near Great Salt Lake and the Ely route through Nevada took us by this mine near the town of Ruth.   We picked up this card on one of our trips during the 1970s.

It is too bad that one of the super large trucks is not also shown in the photo.  It is hard to explain the scale and scope of an open pit mine like this without something to gauge the size.  The tires on the dump trucks are taller than a grown man.  The trucks are so enormous as to seem unreal.  Equally huge are the digging machines.  It seemed like an endless row of trucks were coming and going picking up a full load of material taking to a processing station and then returning for another load.  Even from a distance there was a constant hum of noise from trucks and digging machines.

As the quantities of copper and gold have diminished crusher mills were built to re-process waste piles so that more ore could be extracted.  While copper and gold are the main ores, silver, vanadium, tantalum and molybdenum are also found here.

Trivia:  Most mines experience disasters and this one is no exception.  In 1912 an explosion killed ten people.  In 1919 there was a labor dispute that resulted in a walk out and demands for higher wagers.  At the start of the Great Depression in the 1930s the town of Ruth had a population of 2,300 and ownership of the mine transferred from Nevada Consolidated Copper Company to Kennecott Copper Corporation 1933.  Today there are about 440 people living in here.  In 1955 the town ceased to be a company town, the houses were sold to the John W. Galbreath Company and occupants were given the opportunity to buy the homes they had previously rented.  About this time the Deep Ruth mine, 2 miles north (Robinson Mining district), was being expanded and the community moved.  In 1978 Kennecott closed the mines at Ruth due to decline.  There were subsequent changes in ownership and operations from 1996 to 2015.  The Nevada Railway Museum has some tracks in the area.  The town of Ruth inspired Stephen King’s novel, Desperation.