If this is Thursday it must be postcards, 253 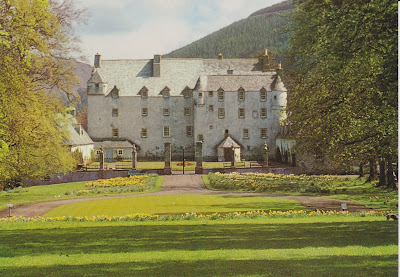 The set of postcards shared this week come from the travel card collection sent by Jim and Kelsey.  The card above shows the oldest continually inhabited house in Scotland, Traquair House.  It was built on the site of an old hunting seat, used by Scottish Kings as early as the 12th century, but this fortified manor house is probably not that old.

When the peace of the Border region was threatened after the death of Axeander III in 1286, Traquair House became an important key in the defense of the Tweed Valley against English invasion.  Ownership changed often, sometimes under control of the English and at other times the Scottish throne.  James Stuart (1480-1513) the illegitimate son of the Earl of Buchan inherited the estate in 1491.  Stuart later obtained letters of legitimization and married the heiress of the Rutherfords and by so doing received the estates of Rutherford and Wells in Roxburghshire.  Traquair House was the family seat of the Earls of Traquair for four centuries.  In 1875 it passed to a cousin of the Stuarts, Henry Constable Maxwell, a direct descendant on the female side.  The current laird of Traquair is Catherine Maxwell Stuart. 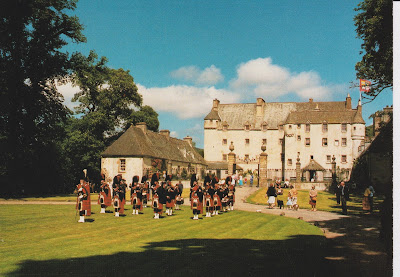 How big is this house?  There are 50 rooms including a Drawing room with ancestral portraits, a dressing room decorated to show what life was like in former times; a Museum room containing a mural dated from 1530; the King’s room where Mary, Queen of Scots stayed in 1566; the Still Room where breakfast was served; the Dining room, added in the 17th century; a chapel built in 1829; and a library containing more than 3,000 books. 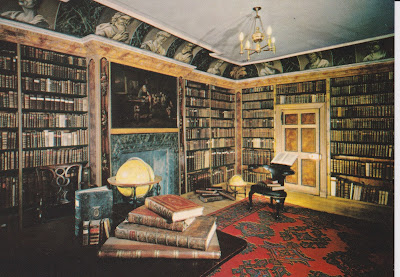 The fifth Earl, Charles Stuart, installed the bear gates at the main entrance in 1738.  The gates were closed in 1745 after the Scottish rebellion and the Earl vowed they would never open again until a Stuart king returned.

The following anonymous poem is printed on the card reverse:

"Dool an' sorrow hae fa'en Traquair,
An' the Yetts that were shut at Charlie's comin'
He vowed wad be opened nevermair,
Till a Stuart King was crooned in Lunnon.

"Gone are the Stuarts o' auld Trquair,
Green is the Avenue rank an' hoary,
And the Bears look doon wi' an angert glare,
On the "Steekit Yetts" an' the vanished glory." 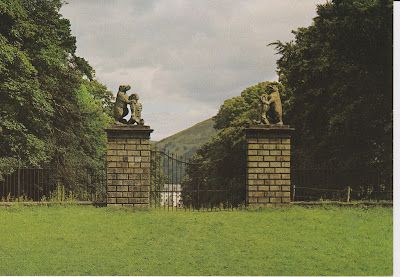 Trivia:  There is a recently planted maze in the gardens.  An annual fair is held on the first weekend in August.  Ale was brewed at Traquair during the reign of Mary Queen of Scots and in 1739 a 200-gallon copper vat was installed in the brew house located under the chapel.  In 1965 Peter Maxwell Stuart started the Traquair House Brewery using 18th century domestic brewery equipment that had once been used to make beer for the house.  Best known for the two main brands, Jacobite Ale and House Ale, the brewery also makes a range of other beers.