If this is Thursday it must be postcards, 274 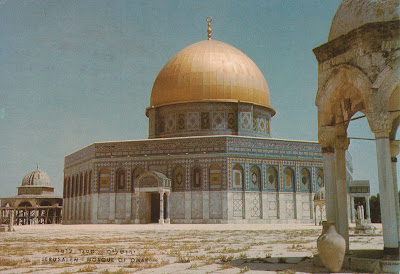 An American friend who was studying Hebrew and living in Beer-Sheba but looking for work in Jerusalem sent this postcard with a picture of the famous Dome of the Rock in Jerusalem.   She had taken her dog with her and in the note on the card mentioned in part, “she (the dog) was quite a novelty in a country unused to pet keeping.”  Here are her comments about the Dome: “This mosque is marvelous—continually being built since the 8th century or so—inside is The Rock, the center of the world—the 2nd center I’ve seen (the other at Delphi)!”


Published by "PALPHOT" Herzlia in Israel the postcard has the number 8131 at the center back under the company logo.  The place is identified in Hebrew, English and French.

The Dome of the Rock also known as the Mosque of Omar is located on the Temple Mount in the Old City of Jerusalem.  The card was sent in October 1967, the same year as the Six-Day War that happened in June, and was also the first year non-Muslims were given very limited access to this landmark but were not allowed to pray on the Temple Mount, or take any religious artifacts or anything with Hebrew letters on it with them to this place.  Because of security concerns the Israeli police helped to enforce these rules.  In 2006 the Temple Mount was opened regularly to non-Muslim visitors during certain hours and prohibited at other times.  All visitors are subject to strict security screening.

Completed in 691-692 CE it was built on the site of the Roman temple of Jupiter Capitolinus, which had been built where Herod’s Temple and earlier still the Temple of Solomon stood.  The Foundation Stone is cordoned off in the center of the dome and is supposed to be the site where Abraham prepared to sacrifice his son, Isaac.  The Stone and its surroundings is the holiest site in Judaism.  Muslims believe that the rock is where the Prophet Muhammad led prayers and rose to heaven to receive instructions from Allah.  The dome collapsed in 1016 and was rebuilt in 1021.  The architecture and mosaics were patterned similar to that of nearby Byzantine churches and palaces.  Several changes have been made to the structure over the years.  Prior to 1959 the roof had been blackened lead that was replaced with aluminum-bronze plates covered with gold leaf during a massive restoration project 1959-1962.  The tiled façade shown on the card above is from the 16th century.

Included here are two other interesting items.  The stamp on the card shows the Straits of Tiran, narrow sea passages separating the Gulf of Aqaba from the Red Sea, and the Israeli flag. 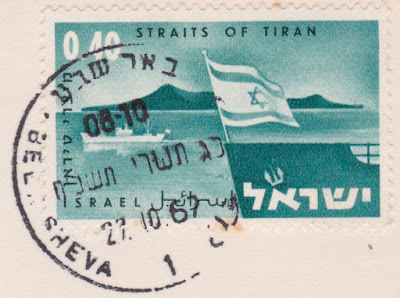 Bob had several of these Israeli coins and I liked the design then discovered that it was minted close to the time the postcard was mailed; hence I decided to share it with the card.  Prior to about 1970 Israeli money was minted as pounds/lira after that time it was changed to shekels and more recently to new shekels.  This coin is identified as both “pound” and Agorot Shekel from about 1971. 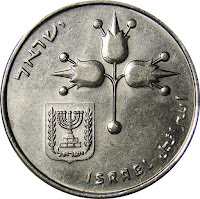