If this is Thursday it must be postcards, 275 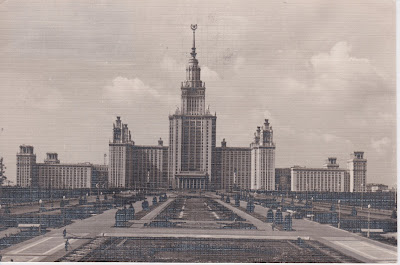 This is a Linen-Type postcard with a picture of the Moscow State University in Moscow, Soviet Union (Russia) from 1960.  It was sent by a friend who was studying biological sciences at this university that is rated among the best in the world.  The message reads:   “Just a little picture of the fine university where I live and study.  Everything is going fine but I shall soon be extremely busy.”   The university was founded in 1755 and was originally called Lomonosov Moscow State University after Ivan Shuvalov and Mikhail Lomonosov promoted the idea of a university in the city to the then Russian Empress Elizabeth who decreed its establishment 25 January 1755.  Russians still celebrate the anniversary of its founding as Students’ Day.

There are what look to be photography credits on the reverse and a brief explanation of what is shown on the postcard but I do not have a Cyrillic option for translation so I am reproducing that section of the card reverse below.

Originally the university was located in the city of Moscow but in 1953 it was moved about 3 miles or 5 km southwest of the city center.  As the city has grown the university is once again within the city limits.  Following the October Revolution of 1917 admission was expanded to include children of the proletariat and peasantry.  In 1919 fees for tuition were abolished to help working-class children prepare for entrance examinations.  During Joseph Stalin’s First Five Year Plan of 1928-1932 prisoners from the Gulag were forced to work on the newly expanded university.  The main building pictured on the card was the tallest building outside of New York City when it was built.  The central tower is a littler over 787 feet or 240 meters tall, 36 stories high, and has four wings that contain faculty and student accommodations.  It has 5,000 rooms and about 20 miles or 33 km of hallways.

The stamps are interesting from a historical perspective.  The stamp at the left is of Lenin and the Revolution, the middle stamp shows the back side of the Moon during the Sputnik era, and the right stamp commemorates Kruschev’s visit to the United States in 1959.