If this is Thursday it must be postcards, 279 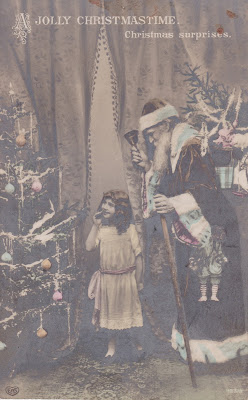 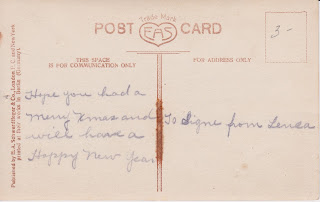 "Hoping you had a Merry Xmas and will have a Happy New Year" the message on this postcard seemed appropriate for the Thursday following Christmas.  The card shared this week was published by E.A. Schwerdtfeger & Co. London F.C. and New York and was printed at their factory in Berlin, Germany.  The card does not have a stamp or cancellation mark but has a message so it may have been hand delivered or included with a gift. The company logo, EAS, is centered on the reverse within a heart shape.  I have estimated the date to be between 1910 and 1915 based on the divided back (1908), the addition of New York for the company (1910), and the way the child is dressed in the picture but it could be a few years later.

E.A. Schwerdtfeger & Co. was established in 1894 and although the Berlin factory suffered severe damage during World War II they reopened and became one of Germany's largest greeting card companies.  Prior to the war in addition to the real photo postcards, like the one above, they also published calendars and glanzbilder or glossy photographs.  Many of the early postcards were hand colored and this card shows some evidence of added color on the fur trim, the pig (upper right), pail, doll, tree ornaments, and the little girl's sash.  It is hard to tell if the colors are as bright as they were originally.  Schwerdtfeger card subjects were most often actresses, children, coronation portraits, and holidays but this company was noted for postcards featuring fashionable women often in exotic costumes.  In 1910 the company expanded with an office in New York.  Later, in 1922, the Mimosa paper manufacturer became a large shareholder and took over the postcard department of the company.

There are many Christmas details found on the card.  It is almost like a "Where's Waldo" game to see how many one can find.  Father Christmas the traditional English name for Santa Claus or Saint Nicholas is the dominant image.  The original Saint Nicholas, fourth Bishop of Myra, Turkey, was known for his alms-giving and was very generous to the poor, most often secretly.  The Father Christmas on the postcard holds a bell announcing the joy of Christmas and possibly the ringing in of the new year ahead.  He is leaning on a staff or cane representing a shepherd's crook.  At his waist is a doll with a bag of small toys and a bucket.  Another bucket or pail can be seen near his shoulder just below the pig.  A small sailboat is near the pail.  Pails and buckets for water were often in evidence as practical necessities when a tree held burning candles!  The little girl seems entranced by the tree decorated with balls and tinsel. One story about why tinsel was used on Christmas trees told of a poor family who did not have any decorations.  Spiders spun webs that were magically turned into silver and from then on tinsel was hung on the trees.  The ball ornaments might represent fruit, such as oranges, that were in scare supply during the winter and were a traditional Christmas treat.  The candles or lights remind the faithful that Christ was the Light of the World.  There are many more symbols and legends associated with Christmas.