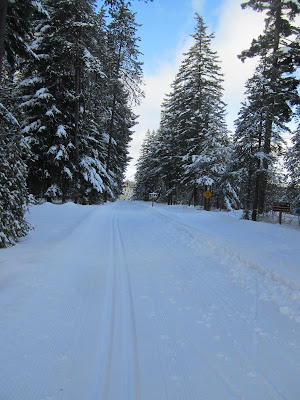 We have gone cross-country skiing a couple of times already this winter.  Once at Hyak and most recently at Lake Easton State Park.  We had planned to do Hyak again but it was during the holidays and hordes of people had descended on Hyak mostly to let children play on the popular sledding hill.  There was a very long line to get into the parking lot.  We waited for a while and then Bob got out and walked up to see what the situation was like.  The lot was almost entirely full and we were in the middle of the long line of cars.  Even though we have a sno-park pass he didn't think there would be any spots left and the line of cars was not moving so we turned around and headed for Lake Easton hoping that would be less crowded.  It meant another 20 minutes or so of driving but that was better than just sitting in the car waiting for the same amount of time with no promise of a place to park. 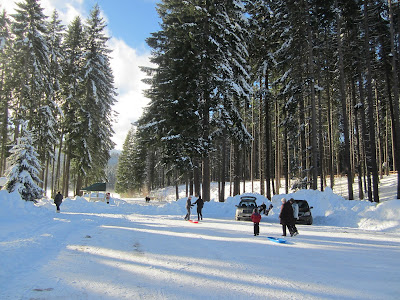 Almost empty Lake Easton parking lot
There were very few people at Lake Easton when we arrived, one other couple with skis and two young women with snowshoes.  The trail had been recently groomed and it was quiet, calm, and peaceful.  By the end of the day we had encountered about 14 people and 5 dogs instead of probably about 200 people and who knows how many dogs at Hyak.  When we got back to the parking lot there were more cars but still plenty of spaces.  Most of the new arrivals were people with children looking for sledding places.  Unfortunately some of the kids had really trampled the ski tracks making it a little more difficult to ski but that was only in one small area near the lot. 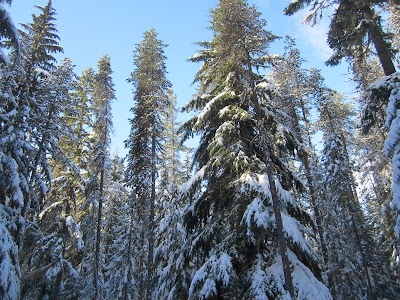 Beautiful tall trees with a frosting of snow and blue sky 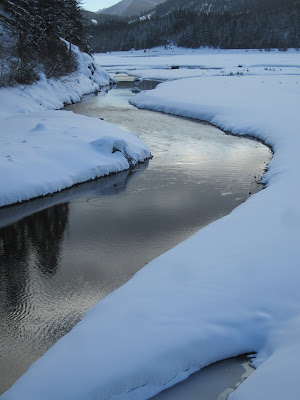 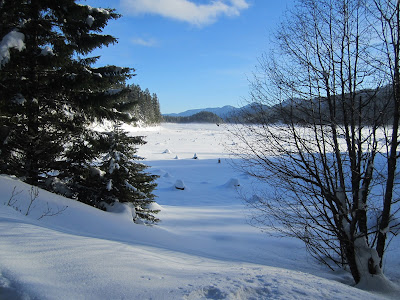 Views from the bridge of the stream and the lake 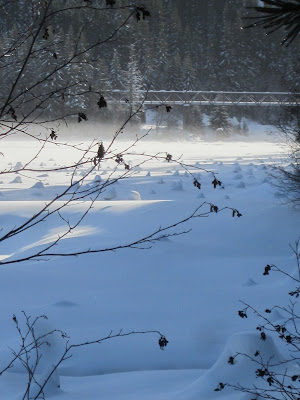 There was low lying ground fog on the snow covered lake. 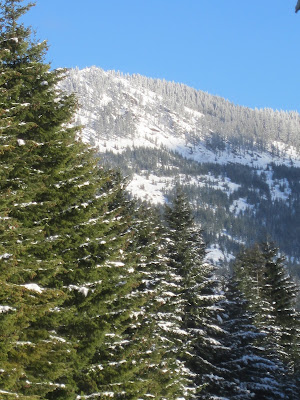 Mountain views along the way

Hyak is flat and the tracks go right along side the lake so the views are nice and I don't have to worry about falls or trying to stop on hills but there is only the one long trail.  There are heated restrooms and that is a big plus.  Lake Easton is a State Park so there is a very nice heated restroom there that has an extra room and benches so boots and clothes can be switched in warmth and comfort if desired. 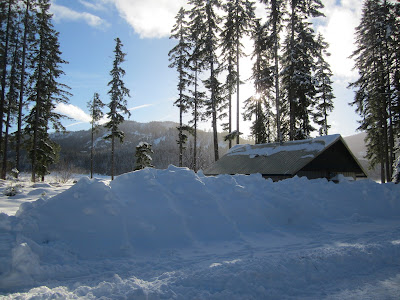 At Lake Easton there are lots of off shoot trails, some in the woods and some with lake views, most marked blue for easy but some moderate ones too.  There are separate trails for snowmobiles and snowshoe folks can go along side the cross-country tracks but are supposed to leave the tracks nice and clean for skiers.  The more difficult trails have steeper longer hills and more curves. 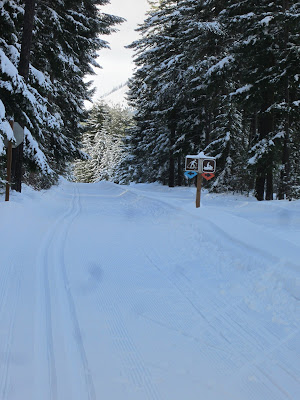 We still choose the easy ones for now.  I was a bit apprehensive about the hills I remembered from last year when I had to take off skis and walk down but this year we found a way around the worst area and went down two smaller hills without super sharp curves.   I managed to schuss down, didn't fall, gained more confidence, and managed to do a modified snowplow--it may not seem like it but lifting one foot out of the track to make the plow while traveling downhill is not so easy to do and I often lose my balance.  I am ready to try hills again.  It felt like I was going really, really fast but Bob assured me I was not going more than 5 to 7 miles an hour.  Elation turned to a little bit of deflation with that news. 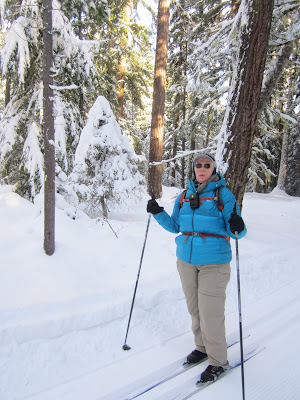 Hands are still a bit cold

It was about 25 degrees F when we started out and my hands, as usual, were very cold and took a long time to warm up.  We have now purchased some hand warmers and will use them next time if necessary.  By the end of the day we were both very warm and I had to tie my ski hat up to cool down.  I use a baseball cap with a ski hat over it and sometimes even the hood of my jacket too.  The brim of the cap keeps the ski hat from slipping down and provides some shade for eyes as well.  My eyes are extremely sensitive to light so I either wear dark sunglasses or my regular glasses that turn dark in the bright light.  We wear lots of layers and take backpacks so we can take some layers off if we get too hot.  The net effect of the layering is that I look like Charlie Brown in his snowsuit but that is okay if I can stay comfortable.  With cold hands a factor I didn't want to remove gloves to take photos and my camera doesn't work as well in the cold so Bob took the pictures and slipped my camera in his inside pocket to keep it warm and ready to use. 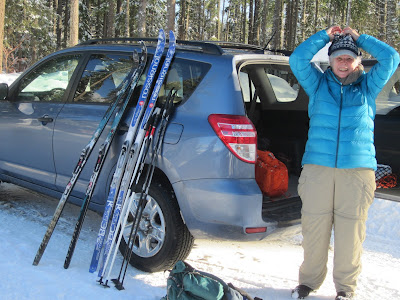