If this is Thursday it must be postcards, 262 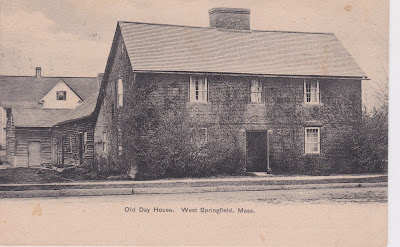 This used 1909 vintage postcard has a picture of the Josiah Day House built 1754 in West Springfield, Massachusetts.  Today the house is owned by the Ramapogue Historical Society and was added to the list of the National Register of Historic Places in 1975.  It is the oldest known brick saltbox house in the United States.  The Springfield News Company published the card.

The saltbox is a traditional New England style of architecture with a long pitched roof that slopes down to the back.  There would be two stories in the front section of the house and one story at the back.  As the family grew a lean-to was added to the two story front portion as an economical way to enlarge the house.  In some of the very early versions of saltbox houses the lean-to section might have a ceiling less than six feet from the ground level.  This style was popular throughout the colonial period.  Usually the houses were wood frame construction, however, the Josiah Day house is mostly built of brick.  A central chimney and a flat front exterior are usual with a long, low rear roof line being the most distinctive feature.  The entire structure resembles that of the wooden lidded boxes used to store salt of that time.  Metal nails were used sparingly so many of the joints were held together with wooden pegs, braces and trusses or mortise-and-tenon joints.

Josiah Day purchased the land in 1746 and by 1754 the house was completed.  The house ownership was passed from generation to generation of the Day family.  The last resident of the home was Lydia Day who died in 1902.  Following her death the home was sold in 1903 to the Ramapogue Historical Society.  The main part of the house has remained as it was originally but the back portion was added to in 1812.   The Ramapogue Historical Society has preserved the house in its original state and offers tours on special town days or holidays.  Day family items such as a writing desk, high boy, tables and bedroom furniture remain in the house.  Other items and artifacts are time period appropriate.