If this is Thursday it must be postcards, 264 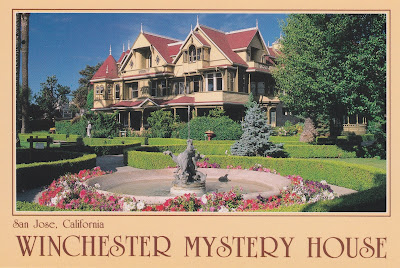 These two postcards show view of the Winchester Mystery House in San Jose, California.  Both cards are unused from 1990.  The photograph on the card above was taken by Ken Glaser, Jr. and is numbered C-234 on the reverse.  The picture on the card below shows an aerial panorama of the estate and was taken by Mike Roberts of Oakland, California.  The number CSF-231 is found on the reverse.  Smith Novelty Company of San Francisco, California, distributed both cards. 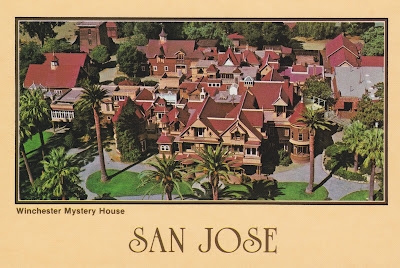 The Winchester Mystery House estate was on six acres, which was reduced to 4.5 acres, has 160 rooms and was said in some accounts to have kept carpenters busy 24 hours a day for 38 years but another account stated that there were some periods of time when workers were dismissed and then rehired to continue on the project.  Sarah Winchester the widow of gun manufacturer William Wirt Winchester began construction on the mansion in 1884 without the benefit of an architect adding here and there in a haphazard fashion and creating oddities such as stairs that go nowhere and windows overlooking other rooms.   Mrs. Winchester inherited a large sum of money and had earnings from the Winchester Repeating Arms Company after her husband died.  The odd configuration of the house and her belief in ghosts led to it being referred to as the Winchester Mystery House.  She consulted a spiritual medium that told her in order to appease the spirits of those who had died from wounds inflicted by Winchester rifles she needed to build the house.

Trivia:  It takes 20,500 gallons of paint to paint the house.  The house is on a floating foundation that allows it to shift freely during earthquakes.  It is this type of foundation that is believed to have prevented total collapse during the large quakes in 1906 and 1989.  The house has 40 bedrooms, 2 ballrooms, 47 fireplaces, 17 chimneys, two basements, three elevators and over 10,000 panes of glass.  There are gold and silver chandeliers, hand in-laid parquet floors and trim.  Mrs. Winchester had easy riser stairways installed so she could move about freely even though she could only lift her feet a few inches due to debilitating arthritis.  Only one restroom had a working toilet all the others were decoys to confuse spirits.  Mrs. Winchester slept in a different bedroom each night also to confuse the ghosts.  For its time the home had very modern conveniences such as indoor toilets and plumbing, push-button gas lights, and a hot water shower.  The Tiffany Company created many of the windows.  The designs included spider webs and the number 13.  The drain covers in the sinks had 13 holes, wall clothes hooks are in multiples of 13, there is even a topiary tree shaped like the numeral 13.  Every Friday the 13th a large bell is rung 13 times at 1300 hours or 1 pm as a tribute to Mrs. Winchester.

At the time of her death in 1923 the house was still unfinished and deemed more or less worthless due to some earthquake damage and the impractical design.  The house was not included in her will and was eventually sold at auction to a private investor for $134,000 and subsequently opened to the public about 6 months later.  All her other possessions passed to her niece who took what she wanted and sold the rest at auction.

For additional information about the house and also about it in popular culture, see: