If this is Thursday it must be postcards, 265 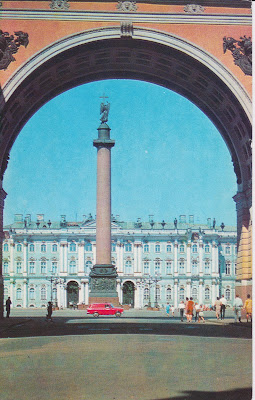 Years ago Bob’s cousin, Boris, sent several postcards from St. Petersburg including this one above of the Alexander Column.  It looks like it has photo credits and a brief explanation of the monument on the reverse of the card; however, I do not have Cyrillic on my computer or access to a Russian translating option so I am not able to share the information at this time.  The part that is decipherable in English shows that the card was printed in Moscow and dated 1972.

The column is located in the Palace Square of Saint Petersburg and named after Emperor Alexander I of Russia who reigned from 1801 to 1825.  It is a monument to the Russian victory in the war with Napoleon’s France.

The column stands 155 feet 8 inches or 47.5 meters high and has an angel holding a cross at the top.  It is made of red granite from Finland that was transported by sea to Saint Petersburg on a barge.  Architects Auguste de Montferrand and Antonio Adamini designed the monolith, which took approximately four years to complete from 1830 to 1834.  The red granite pillar is held in place by its weight of 661 tons or 600 tonnes and took 3,000 men less than two hours to set it in place on the base.  Giovanni Battista Scotti sculpted the pedestal that has decorated bas-reliefs featuring symbols of military glory.  The cast-iron railing around the column was removed during the Soviet period but restored in 2002.