If this is Thursday it must be postcards, 261 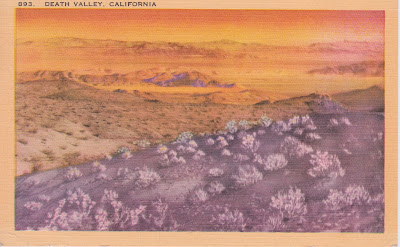 The Longshaw Card Company of Los Angeles, California manufactured the 1941 Linen-Type postcard of Death Valley shared this week.   The title and the number 893 are printed in the upper left of the card margin.  No photographer is identified.  Henry Lowe Longshaw was a former card salesman for the E.F. Clement Company.  He mostly produced view cards and cards with the pictures of the homes of movie stars and some pinup cards.  In business from the 1930s to 1957 many of his cards are known to have orange borders such as this one above.  It is hard to tell if this is the original coloration or if time has caused some fading and distorting of the colors.  Many of the earlier cards produced by Longshaw are known to have retouching and coloring problems.   Most of the cards were printed by Mission Engraving Company with whom Longshaw shared a building.  Longshaw did go on to produce higher quality images but was unable to compete with lower priced cards and closed in 1957.

Like many cards of this era there is an informational blurb at the upper left corner on the reverse side of the card.

Death Valley, located in Eastern California near the border of California and Nevada, got its name from a party of emigrants known as the Jayhawkers who became lost and died in the valley en route to the gold fields in 1849.   It is thought that the term Jayhawker stems from a group associated with the American patriot John Jay of the Revolutionary War era.  It is uncertain how this group of gold seekers took the nickname.  Other uses of the word refer to militant free-state bands along the Missouri-Kansas border around the time of the Civil War and to native-born Kansans or students, fans, or alumni of the University of Kansas.  At one time the slang term “Jayhawking” was used as a synonym for stealing.

The blurb on the card states that Death Valley boasts the greatest contrasts in the country with elevations from 280 feet below sea level to 11,045 feet above.  The scenery shifts from mountains to flaming desert.  The highest recorded and disputed temperature in Furnace Creek was 134 degrees F on 10 July 1913.  The longest period of temperatures over 100 degrees F in the valley was 154 days in 2001.  The average rainfall in this desert is about 1.5 to 2.3 inches a year.  There have been accounts of scattered snow but no accumulation.   Despite this harsh environment there are wildflowers in the spring, Bighorn sheep, red-tailed hawks, wild burros, and roadrunners.  Here and there in the desert are also springs and ponds and Darwin Falls, a 100-foot waterfall and pond surrounded by willows and cottonwood trees.  Over 80 different kinds of birds have been spotted around the pond. 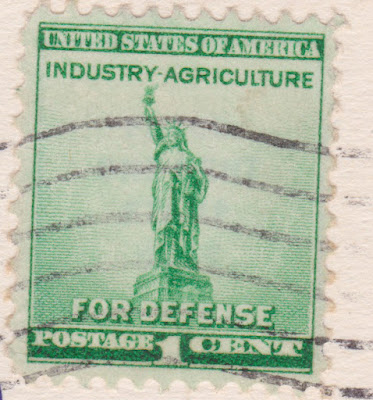 The stamp is a National Defense Issue stamp, one of three denominations, 1 cent, 2, and 3.  It was issued in October 1940 a month after President Franklin D. Roosevelt signed the first peacetime draft.  The stamp shows Lady Liberty on a green background.