If this is Thursday it must be postcards, 70 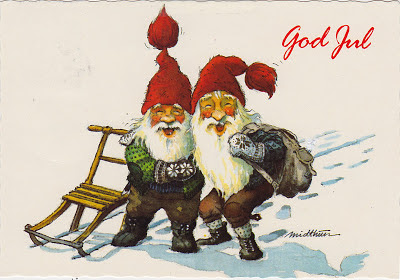 He is called a Nisse in Norway and Denmark, a Tomte, Tomtenisse, or sometimes Nisse in Sweden, and a Tonttu in Finland.  A bit like the Irish Leprechaun, a Brownie, a Gnome, an Elf, and somehow distantly related to Santa Claus.  Ever since 1871 when the story “Lilla Viggs ädventyr på julafton” (Little Vigg’s Adventures on Christmas Eve) and 1881’s poem called “Tomten” both by Viktor Rydberg were published and accompanied by Jenny Nyström’s drawings and paintings showing a white bearded, red capped, friendly figure the Nisse or Tomte has been associated with Christmas but has roots in much older Scandinavian folklore.

Jenny Nyström (1854-1946) was interested in the booming postcard business of her time and tried to persuade the Swedish publishing company Bonnier to enter the market but was not successful.  Ryberg also tried to get his Lilla Viggs printed by Bonnier but ended up releasing it through S. A. Hedlund Publishing instead.  Nyström became one of Sweden’s most productive painters and illustrators.  Strålin & Perrson AB of Falun distributed her work.   Several of her illustrations, including the Christmas paintings did end up on postcards and can be viewed by Googling Jenny Nyström images.  Some of the cards featuring Nyström’s illustrations are labeled as miniature because they are approximately 3x5 inches instead of the more standard 4x6 inch size.

The name Nisse is derived from a nickname for Nils, the name Tomte comes from the word for house lot or place of residence.  Originally a mischievous character associated with the farm or the local ancient burial mounds he sneaks around at night protecting the farm and family or causing all sorts of trouble.  It depends on how nice the family has been and if they leave out a dish of porridge for him.

His size can vary from a few inches in height to about half the size of an adult man.  Usually he is dressed in normal clothes such as a farmer would wear and has a red cap although at least in one instance he is wearing a blue cap.  He is elderly and often has a long white beard.  Norwegian folklore says he has four fingers, frequently has pointed ears, and his eyes glow in the dark.  A Nisse is supposed to be skilled in illusions and can make himself invisible.  It would be impossible to get more than a brief glimpse of him, if that. 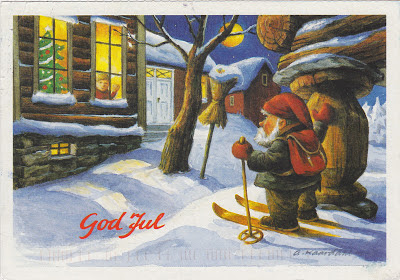 The Landaas family was extremely poor for a period of time just before they left Norway for America but they always left out a bowl of porridge for the Julenisse at Christmas.  My grandmother would tell stories from her childhood of how they would put their shoes just so by the bed or door in hopes that a few nuts or an orange would be left by the Julenisse.  The bowl of porridge was left with a pat of butter on top, a luxury I think.  According to my grandmother they sometimes left sugar and raisins, if they had them, too because it was wise to be as nice as possible to the Julenisse if you wanted all to be well in the house and if children expected some little treat in return.

Julenissen is an unofficial Norwegian ambassador of peace.  He has his own post office box and receives letters from people in all parts of the world.  One of the articles I read said that he should not be confused with the American Santa Claus.  He is described as uniquely Norwegian [Maybe Scandinavian is more apt since his kin appear in more than one country?] and was born centuries ago from a pre-Christian folk belief.  His many small relatives are referred to as Nisser and they live around the houses and in barns and boathouses.   Nisser are shy and only come out from their hiding places to play “harmless tricks” on people or to eat the porridge left out for them.  I will be looking around my yard and in my cupboards for days now wondering if I have Nisser living close by.

These two postcards above sent to me several years ago show Nisser looking like jolly little elves.  The top card was illustrated by [Kjell E.] Midthun the second card is signed by A. Kaardahl.  Nisser often appear on Norwegian Christmas cards and since this is the Thursday before Christmas I share them today with you. 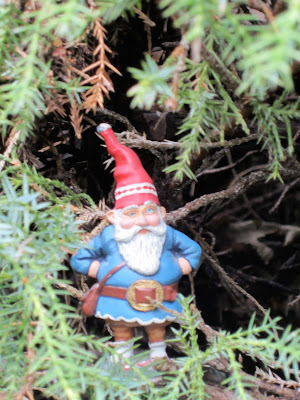 What is that in the tree in my yard?