If this is Thursday it must be postcards, 68 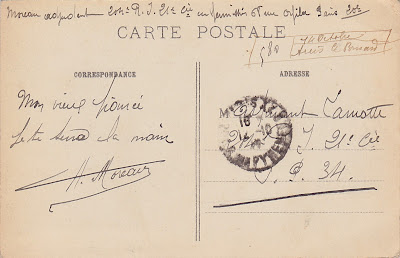 This charming postcard dating from about 1900 to WWI shows “la plus belle avenue du monde” or the most beautiful avenue in the world--Champs-Élysées in Paris, France.  The photo on the card was taken from the Place de la Concorde looking toward the Arc de Triomphe that is just barely visible in the center background.  The card has the number 20 at the top and in the lower right corner is J.M.T. Paris.  Probably the photographer or the publisher as there is no publishing information on the reverse side.  Many of these old cards that I collect are unused and therefore do not have messages from 100 years ago, however, this one is a used card.  My friend in France sent the card to me and kindly translated the message as from:  "Moreau warrant officer on leave" with a greeting "I shake your hand, dear old fellow."

It is fun to notice the way the people are dressed, the ladies walking with parasols and pedestrians crossing the street.  There are a few automobiles but also several horse drawn carriages and buggies.  The roadway is paved today but in the postcard it looks more like cobblestones or bricks.

Paris is divided into Arrondissements that “coil” clockwise out from the center of the city like the spirals on a shell.  The Champs-Élysées is located in the 8th Arrondissement northwest of the city center.  The avenue is lined with clipped chestnut trees and contains luxury specialty shops, cafés, cinemas, and is considered one of the most expensive strips of real estate in the world.

From the top of the Arc de Triomphe* the avenue seems to stretch out almost to infinity but is in actuality about 1.18 miles.   Today the traffic on the avenue is more or less constant day and night and much different than the modes of transportation shown on the card.   Wide sidewalks or footpaths have been created on either side and there are crosswalks but pedestrians no longer can walk in the street as shown on the card nor are horse drawn buggies and carriages the norm. 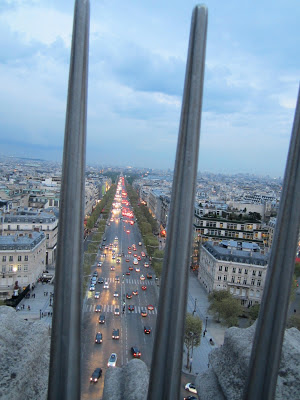 View from the top of the Arc de Triomphe

Before 1616 the avenue was fields and market gardens.  It was Marie de Medici who extended the Tuileries Garden with an avenue of trees.   Louis XIV had the avenue transformed by the landscape architect André Le Nôtre and it was then called “Grand Cours” or the Great Course in 1670.  It was not until 1709 that it took its current name of Champs Élysées.  It was several more years before the avenue became what is now familiar.  Because of the size and proximity to famous landmarks the avenue has been the site of notable parades.  Every year on Bastille Day the largest military parade in Europe is held on this avenue.  The famous Tour de France bicycle race has finished here since 1975.  Huge gatherings take place on New Year’s Eve and spontaneous political gatherings occur here and at the Place de la Concorde to the east also.

Try and imagine this avenue at Christmastide when there are special lights all along it, sometimes making it look like snow is falling from the trees.  So beautiful.   And that is why I posted this card on this first Thursday in December.

Notes:
For more information about the avenue, more pictures and an almost identical postcard from 1890 see this link: http://en.wikipedia.org/wiki/File:Paris.champs.elysee1890.jpg

*When we got to the top of the Arc de Triomphe we were all directionally confused at first, so I hope this is facing east toward Place de la Concorde and apologize if it is not.

As always, thank you to my friend for the card and for the translation.  Both are much appreciated.
at 9:19 AM