If this is Thursday it must be postcards, 402 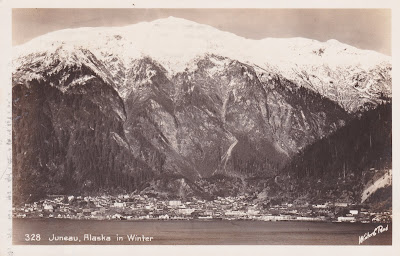 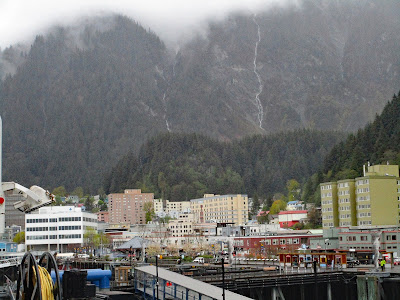 The black and white postcard is from 1939 and shows the city from further out in the bay.  The card is numbered 328 and titled “Juneau, Alaska in Winter” at the lower left, the photographers are identified as a Winter & Pond.  Lloyd V. Winter and Edwin P. Pond were photographers who documented the Klondike Gold Rush, mining operations in the Juneau district and also traditional Tlingit culture from about 1893 to 1940.  Pond was one of the special agents for collecting exhibits and photographs from Southeastern Alaska for the 1909 Alaska-Yukon-Pacific Exposition held in Seattle,Washington.

Lloyd Valentine Winter (1866-1945) and Edwin Percy Pond (1872-1943) landed in Juneau in 1893.  By 1896 they had published a catalog of their photographs that could be mail ordered through their own store.  A scrapbook of pictures called “Trail of 98” had pictures of the journey up the Dyea Trail and over Chilkoot Pass in 1897-1898.  They sold copies of this book to tourists for many years.  Their most popular images featured native villages, people, scenic views, and the Klondike Gold Rush. 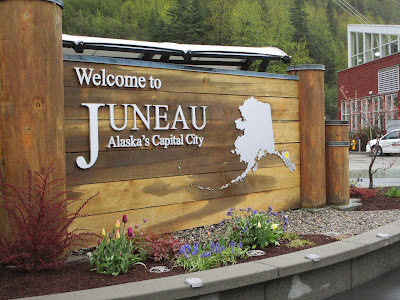 Although both my mother's and father's families had many connections to Alaska and Juneau in particular, I had never been there before, hence this was a much anticipated trip.  Just getting off the ship one of the first things we saw was this sign welcoming us to Juneau. 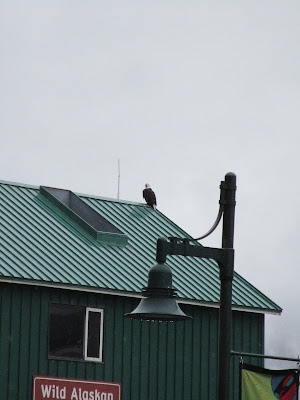 The second thing was an eagle sitting on a roof. 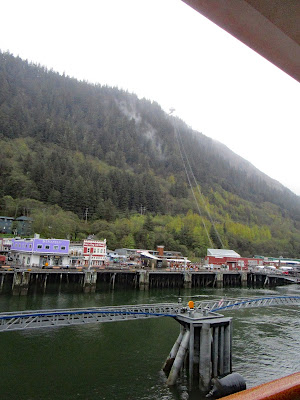 From the ship looking at the cables for the tram car 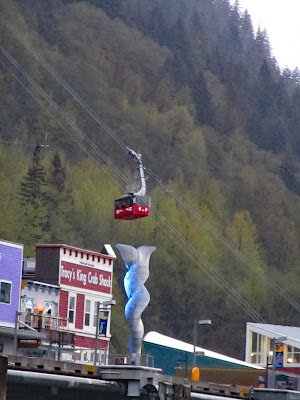 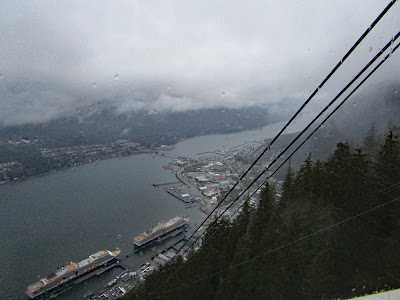 Looking down from the platform at the top of the Mt. Roberts tram

Southeast Alaska get about 151 inches or 383.5 cm of rain a year so we were not too surprised to be greeted by clouds and rain the day we were there.  My friend and her husband met us at the terminal and were our guides for the day.  I had not seen this friend for many years and the chance to visit with her and reminisce about our childhood days was a wonderful treat.  We went up the Mt. Roberts tram and took pictures looking down on the city far below.  As I have mentioned before, heights are not my favorite thing but the tram holds a lot of people and it felt more like a funicular, attached to the ground, than suspended on cables hanging in the air so it wasn’t too scary after all. 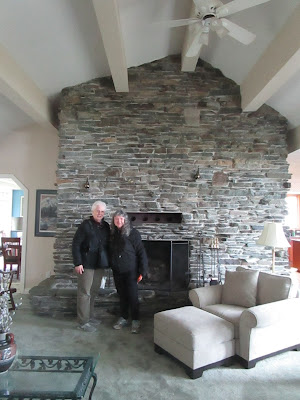 In front of the fireplace

One of the highlights of the day was a visit to the house my father, her father, and my brother built along the beach of the Gastineau Channel.  The new owners had significantly remodeled and changed much of the original dwelling but the magnificent fireplace that Dad built is still a centerpiece in the house.  Some of the fireplace stones contain iron pyrite cube crystals that are sometimes called Fool’s Gold.  All the stone for the fireplace was found locally, some came from the beach by the house.  I spotted several of the crystals looking like unexpected gold nuggets in the stone sticking out in random places. 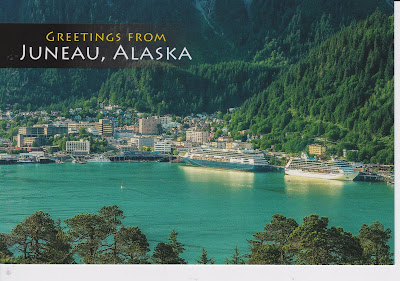 This is Mark Kelley Images of Alaska postcard with the number PC157 on the reverse shows Juneau the capital city of Alaska and part of the rugged surrounding terrain as it looks today.  Juneau is the only US capital city that has no roads leading into it and can only be reached by plane or boat.  It was the first port on the Alaska cruise we took recently and as can be seen on this card, Juneau is a popular destination for the cruise ships.  The day we visited our ship was one of three.  My friend told me that they have had as many as seven ships on one day.  Since each ship can hold between 2,000 and 4,000 tourists one can see the kind of impact the tourist industry has on the city.

Many thanks to M & B for a wonderful day and a true Alaskan experience.