If this is Thursday it must be postcards, 399

Here are two different views of the same place to share this week.  Both postcards have photographs of the massive castle at Torrechiara by Giuseppe Vicari.  The castle is located in the Province of Parma in northern Italy and was once again shared by our friend who lives in that general area.  The pictures are different but both are so lovely I could not choose which one to put up, hence I am posting both of them.

Another view of the Castle Torrechiara, Parma, Italy


Built between 1448 and 1460, like many castles of that era it was a defensive structure as well as used as a mansion with living quarters.  In this case Pier Maria II de’ Rossi, an Italian count, had it built for his lover, Bianca Pellegrini.  The castle includes a famous hall called the Golden Chamber or Camera d’Oro.  Many of the interior rooms in the fortress castle are decorated with fantastic, grotesque or naturalistic themes attributed to Benedotto Bembo (1423-1489).  In one series of frescoes Bianca Pellegrini is shown running her and Rossi’s fiefs and/or searching for her lover.  There are four connected towers and an inner court called the Courtyard of Honor or Cortile d’onore.  The courtyard is the setting for the Torrechiara Festival dedicated to the soprano Renata Tebaldi.

Pier Maria II de’ Rossi (1413-1482) was known as “the Magnificent.”  Although he was married at age 15 to Antonia Torelli little mention is made of her or if he had any children.  He was in service to Filippo Maria Visconti, duke of Milan and fought five times against the Republic of Venice.  The family fiefs were transferred to him in 1438.  Visconti died in 1447 and Rossi sided with Francesco Sforza.  Sforza sent him as ambassador to Pope Sixtus IV in 1471.  Eventually, after Sforza died, Rossi's fortunes began to crumble.  With his fortresses stormed and besieged he surrendered and retired to Castle of Torrechiara where he died in 1482. 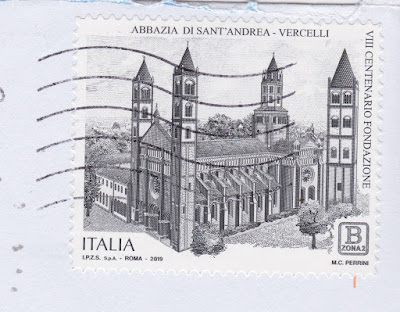 The stamp on the envelope has the Basilica di Sant’Andrea on it.  The church is a monastery in Vercelli, Piedmont, northern Italy founded in 1219 by Cardinal Guala Bicchieri and completed in 1227.

Thank you to our friend who continues to send such beautiful postcards.

Note:  Updating in progress.  The Thursday postcard is taking next week off.  See you on the 16th.
at 8:24 AM