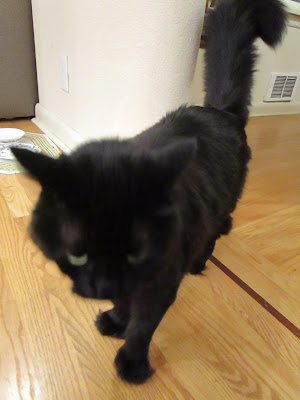 “I want to be perfectly clear, I’m not going through that again!” 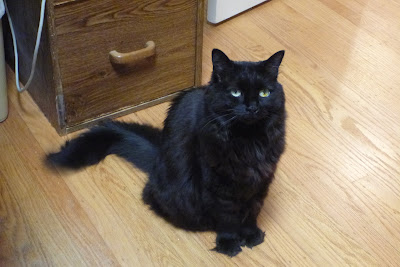 Current non-radioactive phase – “Where do I file the complaint about cruel and unusual treatment?”


TBS had her first post op exam.  She had a dose of Gabpentin the evening before and another dose a couple of hours before the appointment.  That should have made her really relaxed.  Not.

We try to put her in the office about ½ hour before the vet arrives and normally leave her in there for about another ½ hour after they leave.  Didn’t quite work that way this time.  Once the desk chairs, waste baskets, printer, and other items started getting moved out of the office she decided nothing good was going to happen and zipped off to an unknown hiding place upstairs.

As the appointment time drew near we feared we wouldn’t get her confined in the office in time but fortunately she came out of hiding long enough to catch and put in the now empty room.  Once the doors were closed, some mewing began followed by stronger protests.  We ignored those pitiful sounds. 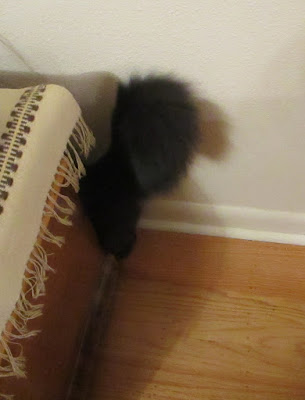 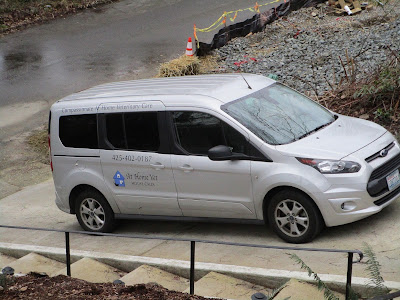 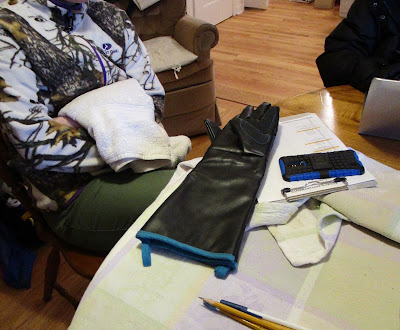 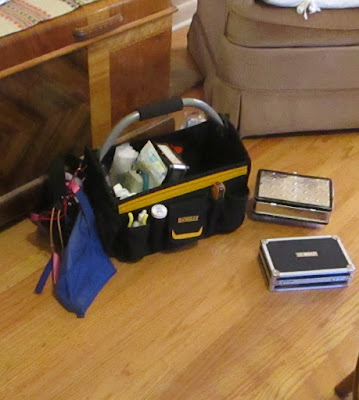 Vet bag
Dr. K arrived with an assistant who produced a pair of long protective gloves and a towel.  The assistant went into the office.  Silence.  A few seconds later a tremendous racket of snarls and screams ensued accompanied by many scuffling sounds.  This lasted for a couple of minutes before the assistant asked Dr. K to come in for the exam and blood draw.  Blood draw successful, urine specimen successful and exam completed.  We really wanted to know if TBS had gained weight as her pre-treatment weight was down almost a pound from what it should be but they were not able to hold her long enough to weigh her.

The office door unexpectedly opened and TBS shot out like a cannon ball, puffed up to twice her size and growling and snorting, hissing, and making terrible meows.  She was frantically looking for anywhere to hide.  We opened the bathroom and bedroom doors to give her a choice and she slunk away into the bedroom where she can hide behind the platform bed. 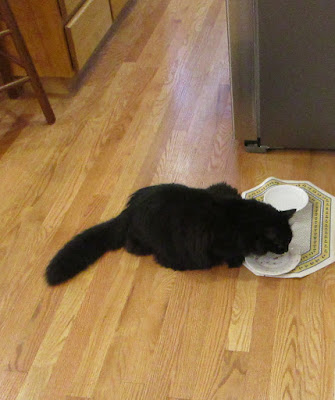 No suspicious additives, safe to eat . . .

We received the test results!  All good news—thyroid levels normal, kidneys normal, and liver levels normal.  There will be one more post op in 2 months but we will worry about that later.  She was supposed to be fasting before the blood draw but we had to give her a little food in order to get the Gabapentin down.  Nevertheless, after all the commotion was over she was more than ready to have a hearty full breakfast followed by a long nap.  It was an exhausting day for all of us.


PS  Don't know what we would do without the At Home Vet service.  They are wonderful, patient, and unflappable when faced with the likes of TBS.  Thank you Dr. K and Assistant!!  And thanks to the Feline Hyperthyroid Treatment Center & Dr. V who have given TBS what we hope will be several more years of healthy life.

TBS may be difficult and cranky at times but she can also be sweet. We love her and are happy to have her feeling better.
at 1:16 PM