If this is Thursday it must be postcards, 339 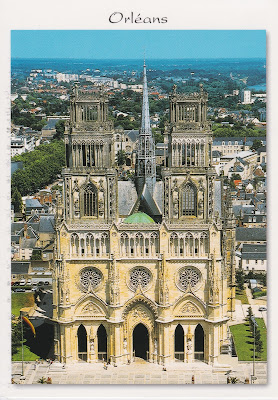 
A front view of the Orléans Cathedral, Sainte-Croix, is pictured above on this unused postcard from M.G. Editions.  The card has the number 45 234 058 at the lower left corner on the reverse.

Joan of Arc is said to have attended Mass in this cathedral on 2 May 1429 during the siege of the city.  The story of Joan of Arc, called the Maid of Orléans and also called the defender of Orléans, is told in the stained glass windows of the cathedral.  She said she had visions telling her to support the French King Charles VII in the Hundred Years’ War between France and England.  The as yet uncrowned king sent Joan to the siege of Orléans as part of a relief mission.  She became a prominent figure when the siege ended 9 days later followed by several additional victories and the eventual coronation of Charles VII in Reims.  Joan was captured in May 1430 by the Burgundian faction, allied with the English, and put on trial where she was found guilty and then burned at the stake on 30 May 1831.  She was 19 years old at the time of her death.  The trial was re-examined in 1456 and she was pronounced innocent.  She was declared a martyr.  She became a symbol and popular figure in literature and art.  After a long process, Joan was canonized as a Roman Catholic saint in 1920.

Like many very old churches Sainte-Croix was built, added to, restored and rebuilt over a period of several centuries.  The first construction of Sainte Croix began in 1278 until 1329.  That building was partially destroyed in 1568 and rebuilt from 1601 to 1829.  It is in the Gothic and Gothic Revival architectural styles.

Orleans is located on a bend of the Loire River in north-central France about 60 miles or 111 kilometers southwest of Paris.

As always, thanks to my friend who sent the card.