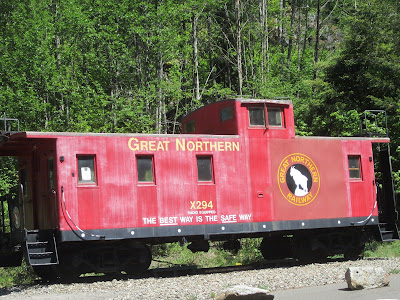 The red caboose and information board at the trail head to Iron Goat, lower level 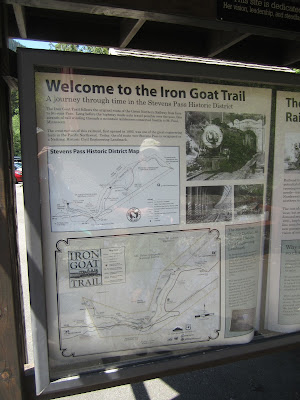 We had previously hiked the upper level of Iron Goat a couple of times, but I had never been on the lower trail before.  Both trails are mostly level following an old railroad line.  The lower trail is every bit as interesting as the upper route and does have railroad artifacts, historical information placards, tunnels, and a long wall that had been part of a snow shed for the railroad.  We saw lots of wildflowers, even some unexpected finds like chocolate lilies and calypso orchids. 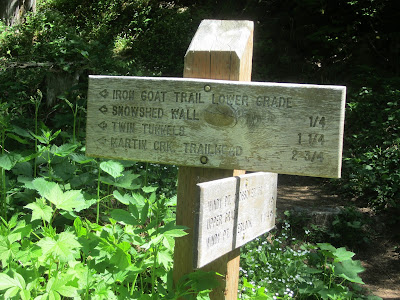 Sign pointing the way to the Martin Creek trail head

It was a hot day; around 80 to 85 degrees F, but there are a few shady spots and some nice cool to cold breezes coming from the tunnels.   The old tunnels from the 1800s that were blasted through the rock and had timber framing on the walls were blocked for safety but one 1916 cement short tunnel had the path running through it.  A few waterfalls and streams also added some coolness to an otherwise hot walk. 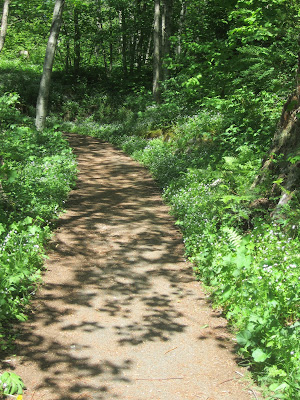 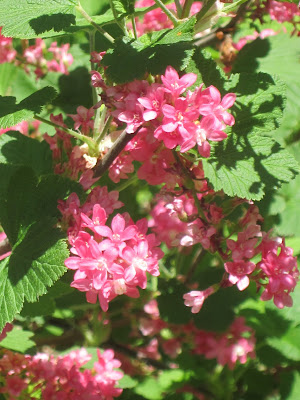 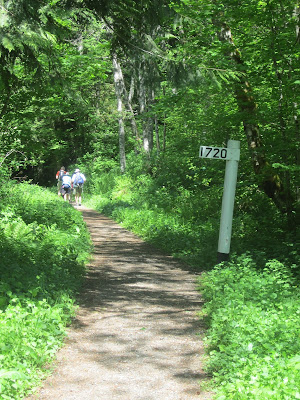 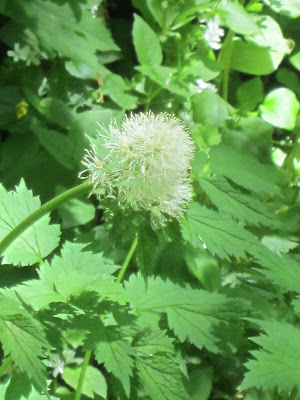 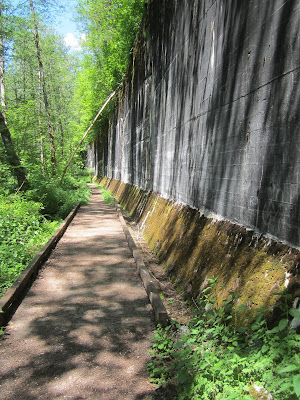 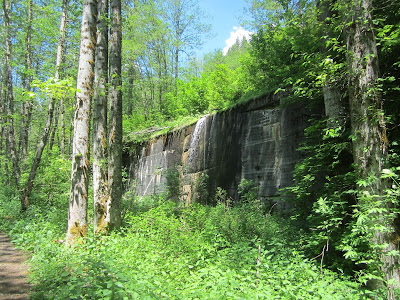 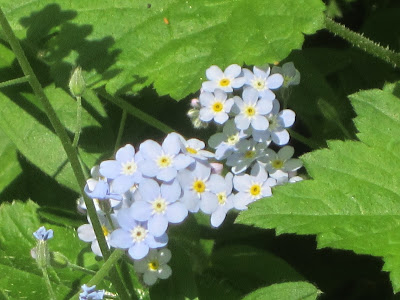 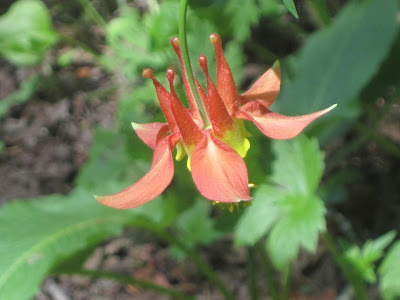 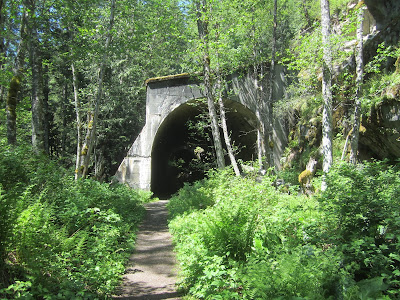 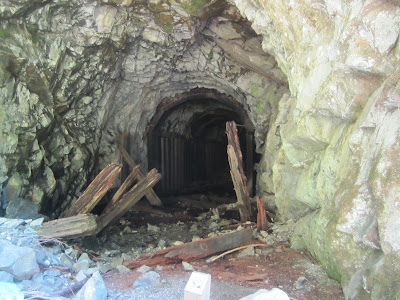 Notice the wood framing inside 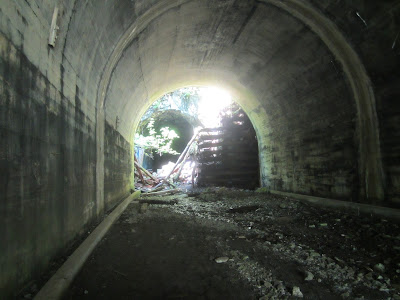 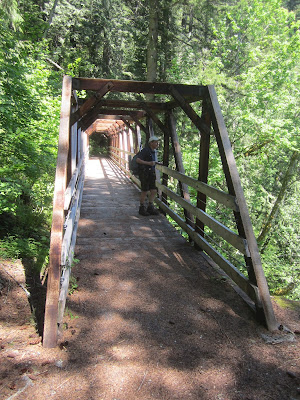 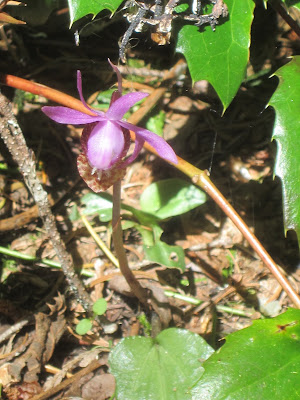 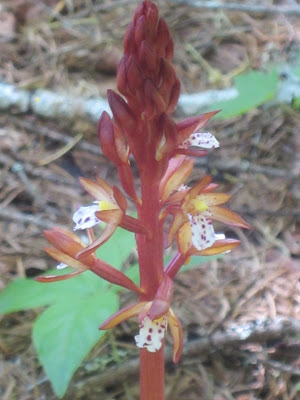 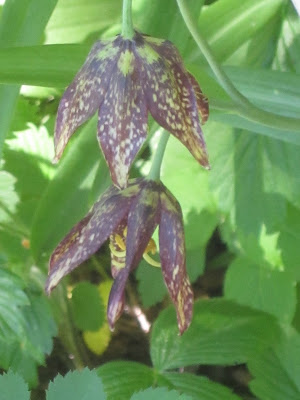 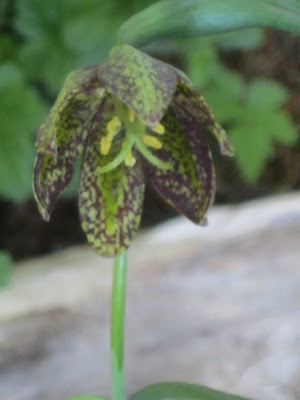 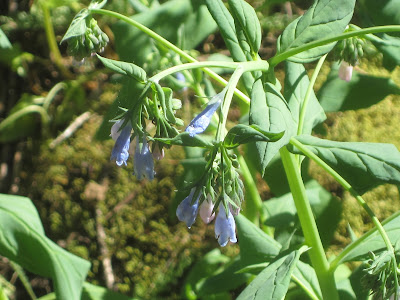 The whole area is called the Steven’s Pass historic district.  We started at the Iron Goat interpretive site and walked up to the Martin Creek trail head where we had our lunch on a bench there.  It was 5.5 miles round trip.  When we got back to the parking lot we ran into some people who had taken the upper trail.  They excitedly asked if we had seen the bears.  Bears?  No, we had not seen any.  They had seen a mother bear with 2 cubs and then later a larger black bear.  One woman said they were yelling so loud to scare the bears that they were sure all the other hikers in the area must have heard them, but we had not heard the yelling either.  The count for the day: 49 people 7 dogs (one man had 5 dogs!). 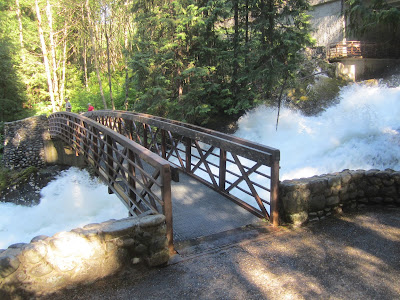 Water rushing down from Deception Falls
[Yes, we did get a little wet crossing the bridge] 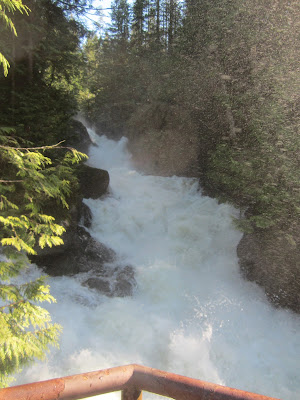 On the way home we stopped at Deception Falls, to view a spectacular water display, which must have been just about at maximum water volume.  Since it was the end of a holiday weekend the traffic was horrendous.  We stopped at Zeke’s for hamburgers in hopes of the traffic lessening a bit.  It really didn’t, but the hamburgers were yummy. 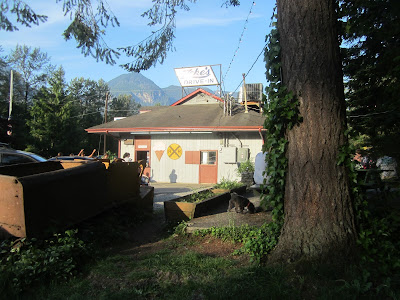