If this is Thursday it must be postcards, 304 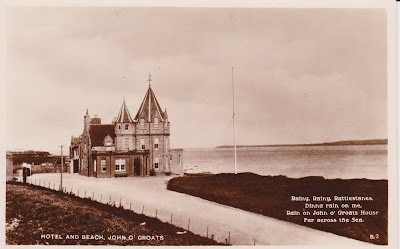 This real photo postcard shows the hotel and beach at John O’Groats Scotland.  It is unused, has the code 8.2 at the lower right corner and includes a children’s rhyme: “Rainy, Rainy, Rattlestanes, Dinna rain on me.  Rain on John O’Groats House Far across the Sea.”  Very like the children's rhyme "Rain, rain go away, come again another day."  I think rattlestanes are hailstones.

In 1903 the Kodak Company introduced a Folding Pocket Kodak camera that would take pictures the same dimensions as a standard postcard of the time, approximately 3 ½ “ X 5 ½ “.  The photos cold then be printed on postcard backs and mailed.  By 1907 Kodak had introduced the postcard service called “real photo postcards” to make a postcard from any picture.  It seems like a very clever idea.  Several other companies also used the term “real photo” from about 1903 to around 1930.  Many of the real photo postcards record area events, show homes, prominent citizens, summer picnics, parades, and disasters such as fires and floods.  The photo cards were also used for commercial purposes like real estate listings or souvenirs.  The reverse side of this card has the notation:  “The Tea Room, John O’Groats,” suggesting that it was a souvenir from the hotel and purchased during a visit to the Tea Room.

The village of about 300 residents is located about 4 km or 2.5 miles northeast of Canisbay, Cathness, in the far north of Scotland.  I wondered why it was called John O’Groats and discovered that it was named after a Dutchman named John de Groot who settled there in 1489 with his brothers.  He ran a ferry service from the Scottish mainland to Orkney.  Some people say the name comes from the fee of one groat that John de Groot was said to have charged passengers.  A groat was a silver coin no longer used that was worth four English pennies or a Scottish fourpence.  The English silver groats were first minted during the reign of Edward I of England in 1272-1307.  Scottish groats were issued during the time of David II, 1367-1371.  The value of the Scottish groat went from fourpence to eightpence and a shilling.  Ireland also minted groats first in 1425 and the last ones during the time of Elizabeth I.  Groats continued to be used in some British territories until the decimal system was adopted in 1955.  Even though the fare is no longer a groat there is still a passenger ferry that goes from John O’Groats to Burwick on South Ronaldsay in Orkney.  The Gaelic version of Groot is Ghròt making it much more likely that the village is named for the man not for the fee.

John O’Groats receives large numbers of tourists each year.  The Hotel shown on the postcard above was built in 1875 on or near the site of the de Groot house.  The following trivia comes from Haydn’s Dictionary of Dates:  The original house was octagon shape with one room, 8 windows and 8 doors to admit 8 members of the family as a means to prevent quarrels for precedence at the table.  Each family head had his own door and sat at an octagon table, which did not have a head of the table.

There is a famous “Journey’s End” signpost where people could take photos.  At one time there was a fee to have a photo taken with the sign but today the fee has been done away with and the old sign has been replaced with a more permanent sign.