If this is Thursday it must be postcards, 460

Logo, Alaska Yukon Pacific Expo, 1909
[found on the reverse of the postcards]


Here are five postcards with night views of the 1909 Alaska Yukon Pacific Exposition grounds.  Frank H. Nowell was the official fair photographer.  The cards were published by the Portland Post Card Co. of Portland, Oregon and made in Germany.  These postcards were in the scrapbook collection of Dick Thompson.  Unfortunately Dick had trimmed the cards to fit the pages of his book but the pictures still provide a glimpse of what the buildings looked like all lit up at night.

The fair grounds may have been one of the first places in the city to have outside lights at night.  Beginning in 1898 The Seattle Electric Company held the contract for the streetcar lines and controlled the electrical grid in the city.  Seattle City Light was formed in 1910.

One mishap at the fair occurred on opening night during a concert featuring the noted Russian baritone, Albert Janpolski.  When the first song ended all the lights went out.  The audience waited 15 minutes until it was announced that the concert would be rescheduled for later in the week.  It was pouring rain outside and fair attendees faced a bottleneck at the turnstiles and then at the streetcar terminals.  The Seattle Electric Company had scheduled the cars to arrive at regular intervals but that could not accommodate the tens of thousands of people to leaving en masse.  The power blackout was the result of a grounded power wire that caused the current to flow through the soaked earth and effectively electrified the grass.  The power to all the buildings was shut off so the defective wire could be found.  Over 20,000 lights were used to illuminate and decorate the buildings on the fair grounds. 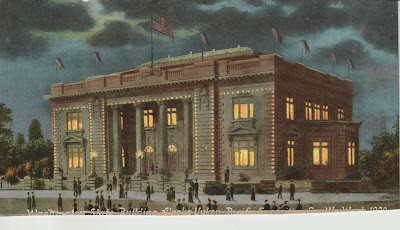 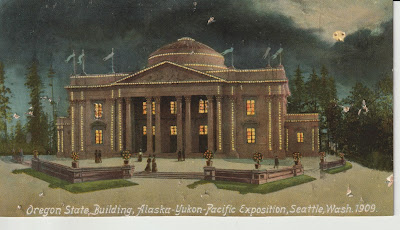 David Chambers Lewis, a Portland, Oregon architect, designed the Oregon Building.  It resembled Monticello and featured paired columns.  This building housed exhibits during the fair but was demolished in 1917. 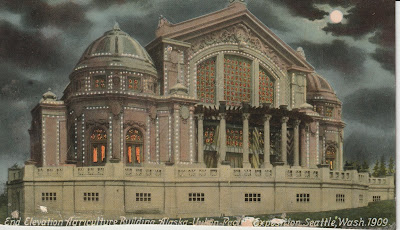 The Agriculture Building and the Manufacturers Buildings bracketed the Cascade Basin and were mirror images.  Another mishap happened on opening day when a 3 year girl dropped her rubber ball in the basin and fell into the water trying to retrieve it.  A man from Walla Walla jumped in and rescued her.  Today the basin is Frosh Pond on the University of Washington campus. 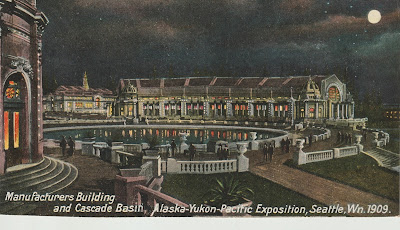 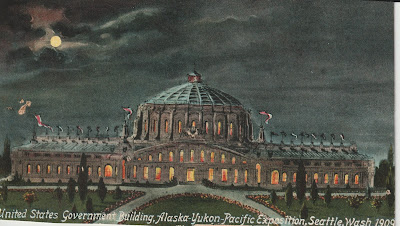 Even though the Government Building had exterior lights, this view shows the interior of the building illuminated but not the outside lights that were similar to the other buildings on the fair grounds.

All these cards are unused, have the official logo and were numbered.