If this is Thursday it must be postcards, 453 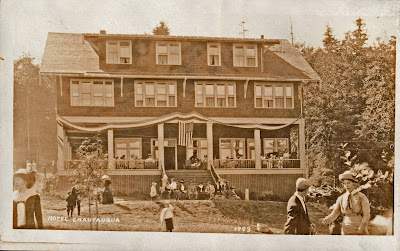 
The other day I was looking for something in my grandmother’s (Lil Anna’s) old photo album and unexpectedly came across this postcard of the Chautauqua Hotel (New York State) identified and dated on the photo at the lower left and middle.  The card is pasted in the album and as it resisted removal and I did not want to damage it, the reverse side remains somewhat a mystery.  Since this was during the period when postcards had undivided backs and therefore only the name and address could be on one side any message would have appeared across the photo.

When Anna left Norway in 1902 she traveled with a ticket paid for by a sponsor family living in Buffalo, New York, which is not too far away from Lake Chautauqua.  Their name and address was printed on a card and pinned to her coat while she waited at Ellis Island to go through immigration.  She described feeling like a parcel post package waiting to be delivered.  This was a fairly common way for young people to be able to travel to American.  Boys would end up usually doing farm work and girls did mostly housework or tended children.  In 1907 when Anna returned to Norway on a visit she began encouraging friends and relatives to come to America.  She became a sponsor and paid for the tickets, when the ticket was paid off she turned it around and sent for the next person.  Axel and Anna even had a small house on their Lake Union property where the newly arrived immigrant could live until he or she got a job and could be on their own.

While in Buffalo, Anna worked for the sponsor family for 2 years to pay off the passage fare and save some money so she could go to a young ladies finishing school in New York.  Unfortunately, she did not include the name of the family in her journal.  Later she worked in the garment industry sewing clothing before going to Boston, Massachusetts to live with her brother, John, and his wife, Lydia for a short period of time and eventually traveling by rail across the country to Seattle in time to visit the Alaska-Yukon-Pacific Expo in 1909.  She married Axel Schroder in Seattle in 1912. 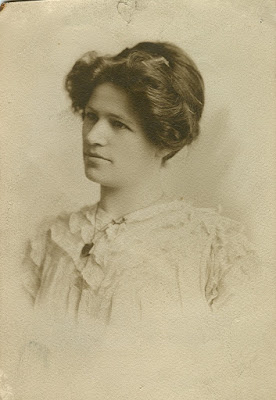 Lake Chautauqua is about 17 miles or 27 km long and 2 miles or 3.2 km wide with a maximum depth of 78 ft or 24 m.  Buffalo is on Lake Erie and Chautauqua is not far from Lake Erie.  The name of the county and the lake come from the language of the Erie people who lived in this area.  The Erie language is now extinct.  The lake is used for boating, fishing and tourism.  There are many shops, restaurants and entertainment.  There is also a stern-wheeler replica, the Chautuaqua Belle, that offers sight-seeing cruises on the lake.

Since it is a souvenir card, and more than likely purchased while on a vacation, it seems likely that sometime during the 2 years Anna worked for the family in Buffalo they took a trip to the lake and that is how the card came to be pasted in her photo album.