If this is Thursday it must be postcards, 451 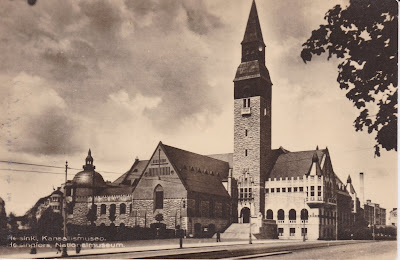 This is an unused Finnish postcard with the date, Summer 1950, written on the reverse.  The black and white photograph shows the National Museum in Helsinki, Finland.  No photographer credits and no information about publication or distribution.  Also no date on the photo, hence the picture may be older than the handwritten date on the back of the card.

Designed by architects Gesellius, Lindgren, and Saarinen it was built between 1905 and 1910 with an official public opening in 1916.  Akseli Gallén-Kallela painted the entrance hall ceiling frescoes in 1928.  The frescoes are done in the national epic Kalevala theme and are based on frescoes the artist painted for the Finnish Pavilion for the Paris World Fair of 1900.

The museum houses objects of Finnish cultural history from the Stone Age to the present day.  The exterior of the building located in central Helsinki is in the National Romantic style and was designed to reflect Finland's medieval churches and castles, while the interior is mainly in the art nouveau style.  In 2006 there was a gas pipe leak and spark from the power distribution cabinet caused an explosion in the Silver Room which damaged most of the display cases and some silver objects.  Nobody was hurt and all the objects were repaired.  The Silver Room was reopened in 2007.  Originally the name was the Finnish National Museum.   It was part of the National Board of Antiquities until 2018 when it became part of the Finnish Heritage Agency under the Ministry of Culture and Education and is now known as the National Museum of Finland.

The exhibits are divided into different parts:
1.    Treasure Troves--includes collections of coins, medals, orders and decorations, silver, jewelry, and weapons.
2.    Prehistory of Finland—the largest archeological exhibition in Finland
3.    The Realm--showing the development of Finnish culture from the Middle Ages to the early 20th century
4.    The Land and Its People—features Finnish folk culture in the 18th and 19th centuries
5.    The 20th century—focuses on Finland and Finns called “Suomi Finland 1900” that was open between 2012 and 2015.
6.    Workshop Vintti—Easy History—is an interactive exhibition.  Activities in this section point visitors to the way to explore the permanent exhibits in the museum.
7.    A new permanent exhibit called “The Profane Middle Ages” was opened in 2017-2018.  Additional planning and construction of the new permanent exhibit is in progress.