If this is Thursday it must be postcards, 437 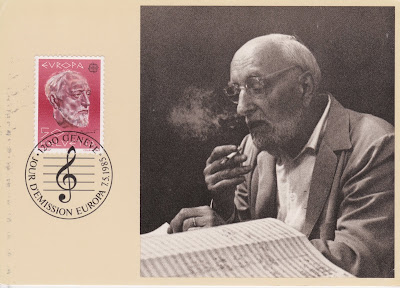 Ernest Ansermet
[photo from the collection of Laurent Kasper-Ansermet]

This week’s postcard is a first day cover, a postage stamp on a cover, postcard or stamped envelope.  First day covers frequently have a pictorial cancellation, such as this one with the music treble clef, name of the city, and the date.  The card is unused; therefore, it was not sent through the mail and not cancelled as most stamps are on used cards.  This type of card is a collector item but not as coveted as a used and officially cancelled card on the exact day or first day of issue.  A card like this one might have had the first day postmark applied weeks or even months after the date indicated so there is no way to tell if the card was purchased on the exact date printed in the cancellation.  First day covers often have an illustration that relates to the theme of the stamp.  This type of illustration is called a cachet.  The photograph of Ernest Ansermet on the right side is the cachet on this postcard.

Ernest Ansermet (1883-1969) was a Swiss orchestra conductor who rose to international prominence after World War II through a long-term association with Decca Records.  Originally he was a mathematics professor at the University of Lausanne.  He began conducting in 1912 at the Casino in Montreux, then between 1915 and 1923 he was the conductor for Diaghilev’s Ballets Russes.   During those years he met and consulted with Claude Debussy and Maurice Ravel about how their works should be performed.  He also met Igor Stravinsky and began a lifelong interest and association with Russian music.  In 1918 he founded his own orchestra, the Orchestre de la Suisse romande (OSR).  He became famous for accurate performances of difficult modern music on his travels in Europe and America.   He was also one of the first in the field of classical music to take jazz seriously.