If this Thursday it must be postcards, 435 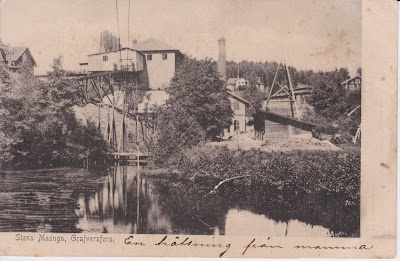 This vintage postcard with a photograph of Stens Grafversfors [Graversfors], Sweden has an undivided back and no postage stamp.  A note on the address side of the card states that only the address is to be written on that side.  Divided backs replaced undivided backs around 1900-1910 in most countries making it possible to guess at the year the card was sent.  Without a stamp or postmark it suggests that the card may have been sent in an outer envelope with a letter or in a package instead of being mailed separately. 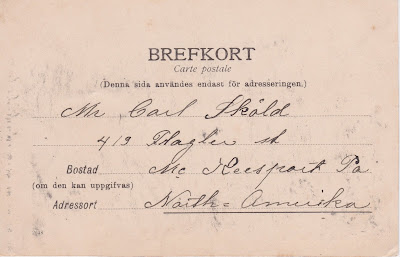 Addressed to Carl Sköld, the message under the picture says:  “A greeting from mother.”   I think it is possible that this scene was a familiar one to Carl who may have lived near here before he left Sweden for America.  Carl was born in 1886 in Kvillinge, Östergötland, Sweden.  He immigrated to the United States at the age of 17 in 1903 and first lived in McKeesport, Pennsylvania where he was living in 1908 and filed the Declaration of Intention papers to become a naturalized citizen.  He received his citizenship in 1914 when living in Seattle, Washington.  That puts the date of the card to between 1903 when he arrived and 1907/1908 when divided backs were introduced.

The scene shown on the card is of Graversfors mill or stone mill named after Jacob Gravers who started the mill around 1736.  Carl Ekman, another mill owner, bought Graversfors in 1857 because the furnaces at his original mill were not sufficient for the manufacture of iron.  Ekman built a new furnace in Graversfors in 1860.  In 1861 the railway line between Katrineholm and Norrköppnat opened for travel.  Then in 1869 the Graversfors post office was established.  From that time until the 1920s Graversfors thrived with trade and had a school.  Times turned bad and the mill was closed in 1936.  The post office closed in 1964 and rail traffic ceased in 1969.  The station house was demolished.  Today Graversfors consists mostly of recreational buildings.