If this is Thursday it must be postcards, 434 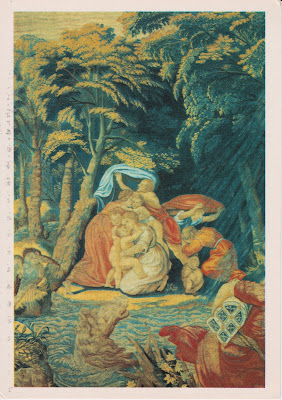 
This postcard has a photograph by Jerzy Malinoswki showing a group of people struggling with the waters on a fragment or section of the tapestry titled “The Flood.”  Krajowa Agencja Wydawnicza [KAW] distributed the card.   The tapestry is part of King Sigismund Augustus’s collection found at the Wawel Royal Castle in Kraków, Poland.  The design is one created from a drawing by Michiel Coxcie and dates to about 1550.

Sigismund II Augustus, born 1520 and died 1572, was the son of Sigismund I the Old.  He was King of Poland, and Grand Duke of Lithuania.  His reign covered the years 1548 to his death in 1572.  He was the last male member of the Jagiellons and although he was married 3 times he died childless thus ending the reign of the line.  A passionate collector of jewels he was said to have had 16 chests of precious items including a ruby worth about 80,000 scudos as well as a diamond medal with the Habsburgs Eagle on one side.  He also collected tapestries and is recorded to have had 360 pieces commissioned in Brussels between 1550 and 1560.

Michiel Coxie (1499-1592) was a Flemish painter.  Coxie studied in Rome where he painted the chapel of Cardinal Enckenvoirt in the church of Santa Maria dell’Anima.  However, his principal occupation was designing for engravers.  He returned to the Netherlands where he continued to work on altarpieces.  In 1541 he became the court painter to the Regent Maria of Austria.  Later Charles V, Holy Roman Emperor, by Philip II of Spain and by Fernando Alvarez de Toledo, Duke of Alva, patronized him.  During that time he also designed tapestries for the Brussels looms.

Traditionally tapestries are woven by hand on a loom with wool, linen or cotton as the thread although sometimes silk, gold, silver or other alternative threads might also be incorporated into the designs.  Decorative tapestries could be rolled up and moved from place to place as desired by the owner.  Typically the designs might include symbols, mottoes, coats of arms, religious and mythological images, or hunting themes.  Tapestries were also hung on interior walls of castles for insulation during the winter.

Wawel Castle located in Kraków, Poland was built during the 13th and 14th centuries at the behest of King Casimir III Great.  It consists of several structures surrounding an Italian-styled courtyard.  In 1978 the castle was declared a UNESCO World Heritage Site as part of the Historic Centre of Kraków.