If this is Thursday it must be postcards, 393 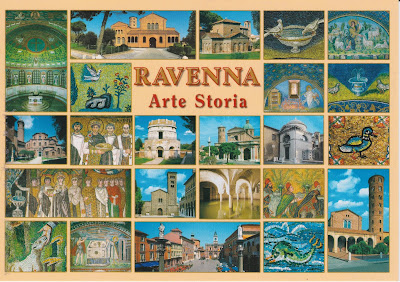 I did not get postcards from all the places we visited in Ravenna, Italy but this one has a selection of views.  It is also a Ediz. Salbaroli issue and has the number 379 on the reverse, lower left corner.

Ravenna was the capital city of the Western Roman Empire from 402 to 476.  During a period peace the Christian religion was favored by the court and resulted in the astoundingly beautiful mosaics for which Ravenna is renown.  Some of the panels on the card show more famous examples of the mosaics.  Many Biblical scenes were reproduced in mosaic as well as symbolic birds, like white doves, and animals that were intended to represent some of the apostles; St. Luke is seen as the bull and St. Mark as a lion.  In some places I felt like we shouldn’t be walking on the floor it was so lovely and so very old.  For example, the small bird seen second from the bottom on the right side of the card was part of one decoration on the floor. 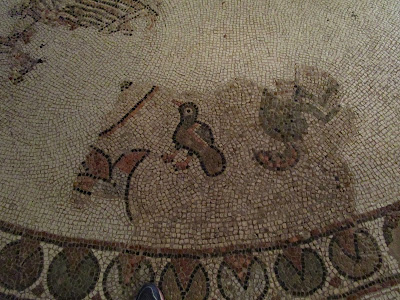 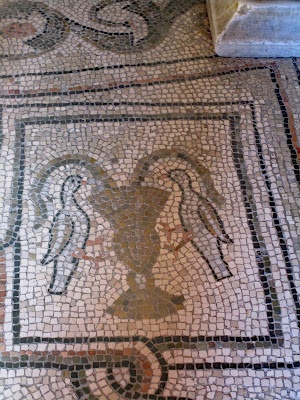 Our friend explained that like Venice, the city of Ravenna was built on a series of small islands and is slowly sinking.  We noticed supporting rods inside many of the buildings.  And in one church the floor of the crypt had dropped 4 feet, then it filled with water. Goldfish swim in there today. 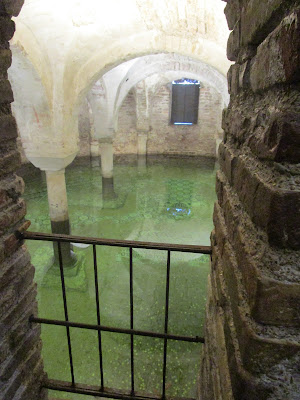 There is an opening for visitors to peek in and see the sunken crypt.  Notice the mosaic tiles on the floor under the water.  However, unlike Venice, the streets are real streets and not canals.  The historic sites are well within walking distance of one another.  We parked the car in a public lot some distance away and had an enjoyable day walking around and able to see all the places on our entrance pass to the UNESCO sites. 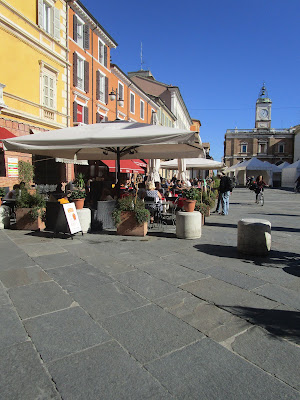 Ravenna is a charming, pretty city with the typical outdoor cafes and flower stalls 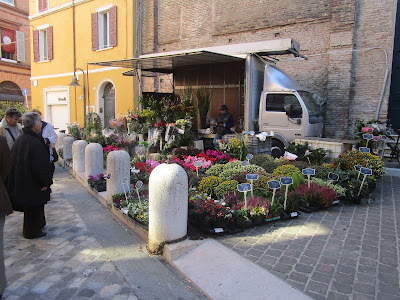 It is not clear how long a settlement was at Ravenna before Roman times but the name is thought to be Etruscan.  Originally there was a lagoon with several small islets and marshy ground where houses were built on piles.  It was overlooked for a time by the Romans but later became a federated city.  Julius Caesar gathered his troops here before crossing the Rubicon.  The city had a wall to protect the harbor making it an acttractive place for the Roman Imperial Fleet.  Today the city is landlocked.  Ravenna prospered and benefited from its association with the Romans.  One of the benefits of the Roman rule was a 70 m or 43.5 mile long aqueduct built by the Emperor Trajan in the 2nd century.  Roman authority was dissolved in the late 5th century and transferred to Odoacer who ruled as king for 13 years.  Theodoric replaced him in 493.  Much of the construction was carried out during the 6th century and later. 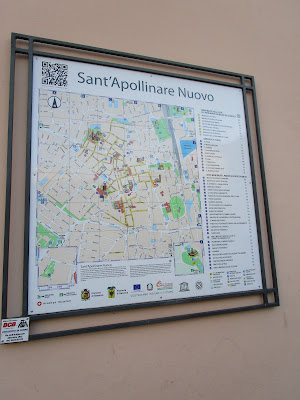 It was easy to see on this map of the UNESCO sites that was posted on the wall of one of the buildings that it is not difficult to walk to all the sites.