If this is Thursday it must be postcards, 391 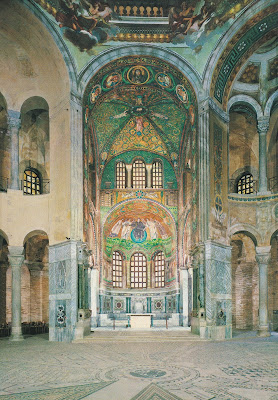 
The postcard shared this week is one I picked up when we were in Italy last October.  The credit information provides Ediz. Salbaroli of Ravenna as the distributor.  The picture is a general view of the apse of the Basilica of San Vitale.  We purchased a pass to 5 UNESCO sites in Ravenna and this was one of those we visited.  Ravenna is known as the city of mosaics and all the sites we saw had plenty of them to marvel at and admire. 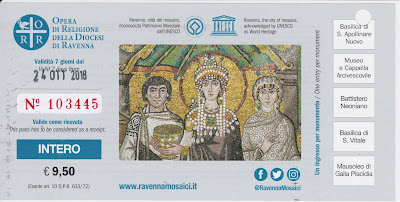 Entrance ticket with the Empress Theodora, 6th century mosaic in the center

Construction of San Vitale began under Bishop Ecclesius in 526 and was completed by the 27th Bishop of Ravenna, Maximian, in 547.  Julius Argentarius, who was a banker and architect, sponsored the construction of San Vitale and also the Bascilica of Sant-Apollinare.  The Baroque frescoes on the dome were added between 1778 and 1782.  The octagonal plan combines Roman and Byzantine elements.  It is famous for its Byzantine mosaics.  It is the only almost intact church from this period to survive to the present day.

From the outside it does not look as fancy or imposing as some of the other cathedrals we saw but once inside it is truly amazing. 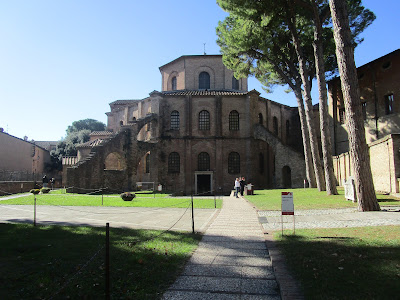 One view of the outside of the Bascilica of San Vitale 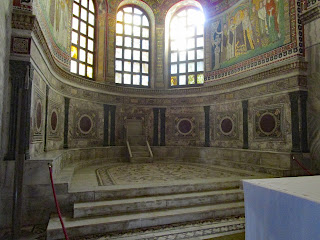 The apse
A mosaic panel on the right shows the Empress and her court.  On the left is a similar mosaic panel with the Emperor and his retinue.  The two panels are among the most famous to be found in the church.  This photo was taken just before a tour group started gathering around. 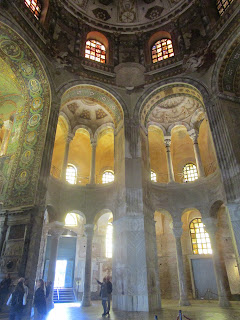 Visitors are dwarfed by the high dome in the center of the octagon.  Walls, floors and sections of the ceiling are covered in mosaics with frescoes in the dome ceiling. 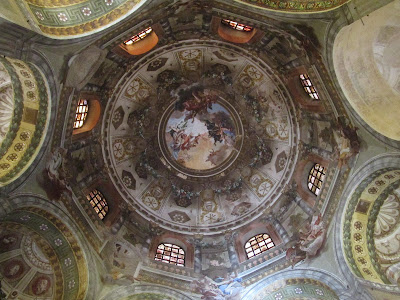 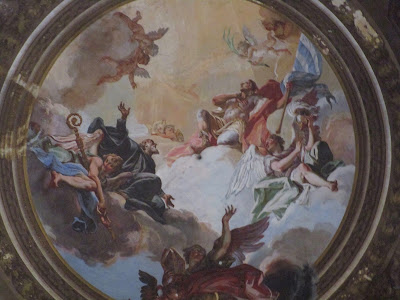 This second card, seen below, is another beautiful mosaic with a heron and a tortoise.  It is another distributed by Ediz. Salbaroli of Ravenna. 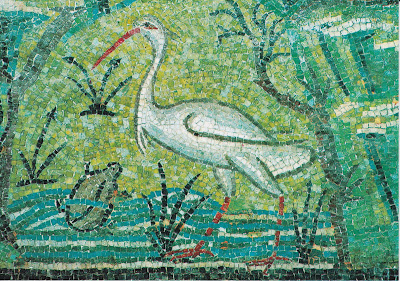 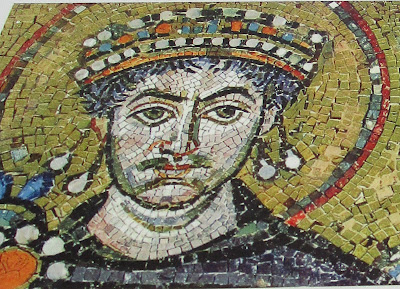 The mosaic with the Emperor Justinianus I is located in the apse opposite the panel with his wife.  This photo was taken from the image on the information placard outside the building.  While we were there a tour group entered. I didn't take photos of the panels possibly because the group was clustered around them and there was not an opportunity to get unobstructed pictures.  The Emperor is wearing purple and has a halo.  The halo was used to show that he was the leader of both church and state.

The floors, walls and ceilings all have mosaics and the top of the dome has beautiful frescoes.  The warm Italian sunlight shines through alabaster windows.  The mosaics are in the Hellenistic-Roman tradition with animals, birds, plants, and people in rich colors and covering nearly every available surface.  Walking in one is astounded by the interior size and height at first and then looking down realizing that the floors are also covered in mosaic designs.


Details of small sections of the flooring.  Three of many different patterns and designs on the floor. 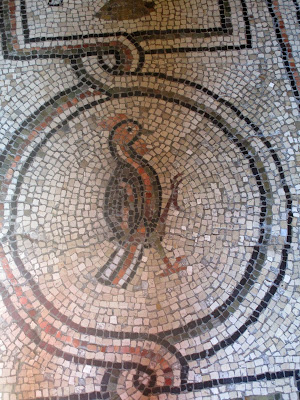 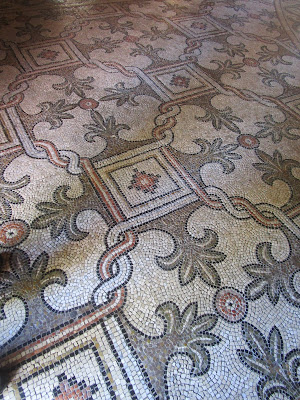 Like other places in Spain and Italy we noticed a lot of marble and tile.  The flooring between the mosaics was marble. 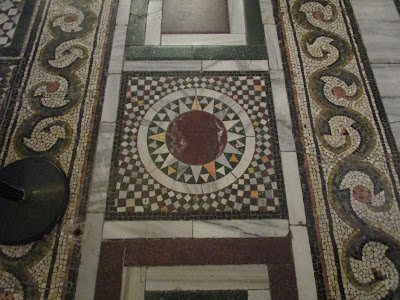 Details of a small sections of the flooring.  There were many different patterns and designs on the floor.

I do not know how high up on a list of places to visit in Italy Ravenna might be for most tourists but it was well worth it.  Special thanks to our friend with whom we stayed and who provided transportation, translations, and guided us around.