If this is Thursday it must be postcards, 362 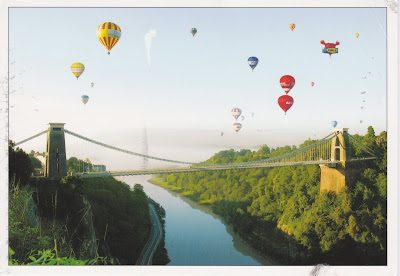 The world famous bridge seen on this postcard is the Clifton Suspension Bridge.  It spans the Avon Gorge and the River Avon linking Clifton in Bristol to Leigh Woods in North Somerset, England.  The bridge opened in 1864 and has been a toll bridge since that time.  The income from the tolls helps to maintain the bridge so (to make a pun) it is self-supporting.  The photograph on the card produced by Provincial Pictures, PP47, is credited to Philip Pierce.  There is a smudge on the card to the left of the center where it went through the cancelling machine and also at the lower right in the margin.

As early as 1753 there was a desire and idea to build a bridge across the Avon Gorge.  The original plans had the bridge constructed of stone, another version was made of wrought iron.  In 1831 an attempt to build the bridge was halted by the Bristol Riots and a later attempt in 1836 failed due to financial difficulties.  Even though the contractors went bankrupt the two towers of unfinished stones were built in 1837.  A design by the great Victorian engineer, Isambard Kingdom Brunel (1806-1859), was the basis for the final design revisions by William Henry Barlow and John Hawkshaw.  The bridge was finally completed in 1864, five years after Brunel passed away.

The towers are about the same height but the designs are slightly different.  The postcard picture shows the Leigh side’s more pointed arches while the Clifton tower side cutouts are a little more difficult to see.  Wrought iron chains pass over roller-mounted saddles at the top of each tower that allows movement when loads pass over the bridge.  There are 81 matching vertical pairs of wrought-iron rods suspending the bridge deck from the big arc of six suspension chains.  The original bridge deck was wooden planking that was later covered with asphalt.

Trivia:  The total length of the bridge is 1,352 feet or 412 meters and it is 331 feet or 101 meters above the high water level.  The toll is £1.00, approximately 8,000 vehicles pass over the bridge each day.  There has been a tradition of lighting the bridge for events. Today the lighting is by LEDs but in 1864 for the ceremonial opening parade magnesium flares were used that were extinguished by the wind.  Later thousands of electric light bulbs were used.  Due to weight overloading concerns the bridge now closes for major events such as the annual Bristol International Balloon Fiesta and the Ashton Court Festival.  The University of Oxford Dangerous Sports Club began bungee jumping from the bridge in 1979.

The Queen Elizabeth II profile stamp design has been used with variations since she became queen in 1952.  While not a complete set these were interesting because they are each a different value and a different color.


As always my thanks to a friend who sends wonderful postcards from travels.