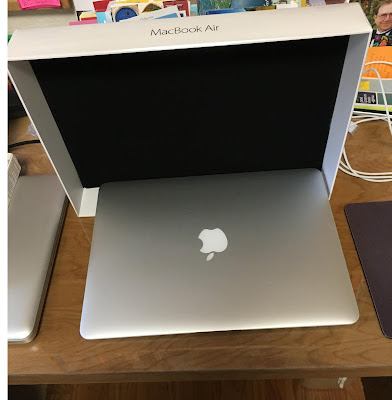 New, out of the box

For several months I have known that time was running out for my aging computer.  A couple days ago while I was working on it, everything went black.  The re-boot process could not complete and the computer sat there in mocking dark silence.  There was a moment or more of sheer panic as I realized all my genealogy, photos, written rough drafts, and correspondence was now in that black hole and currently inaccessible.  I called my ever helpful and patient son and described the situation.  The battery on that laptop had worn out at least a year ago and I had the computer plugged in day and night to the power strip.  Yes, he knew what was wrong.  The motherboard was fried.  By having it plugged in all the time the motherboard had gotten too hot and essentially burned up—fried.  Fortunately, I had backed up to an external drive just a few days earlier so I knew I had not lost too much and he assured me that all the data, even the recent work not backed up, was still on the hard drive and could be retrieved.

Bob and I went down to the Apple Store in the Village and explained what happened.  We had the old laptop in the carry bag with us.  When I mentioned that the computer was 9 years old and asked about retrieving data and transferring the software the salesman called over another person to confer.  Part of that conversation went something like, “this lady has an ancient old computer . . .”

I had determined before I went into the store that there was absolutely no reason to try and repair the laptop because of its age.  It was at least two operating systems behind and too old update.  The two guys at the store agreed.  We didn’t even try to look and see what was the matter with it.  Since I did have a fairly recent backup and wouldn’t be losing too much it was suggested that I just restore the backup to the new machine and see what happens.  I told them I would keep the old computer just in case I had to come back and get help extracting something critical from the hard drive.  Once again they agreed that this was a good strategy.

End result, I am writing this from a new laptop with a slightly smaller screen but one that is much newer, faster and lighter in weight.  So far everything is working okay but I am anticipating a few hitches with some of the older software.  I opted for the 13” MacBook Air instead of trading straight across to another 15” MacBook Pro for a couple of reasons.  The new Pro has different sized ports and I would need to get adapters for any USB connectors.  The Air still has the slot for photo memory cards while the Pro does not.  It was also slightly less expensive.

After some nervous moments during the set up process, everything seems to be working.  I didn’t lose much data, and I am adapting to the smaller screen without difficulty.  Phew!  I don’t want fried motherboard for dinner again. 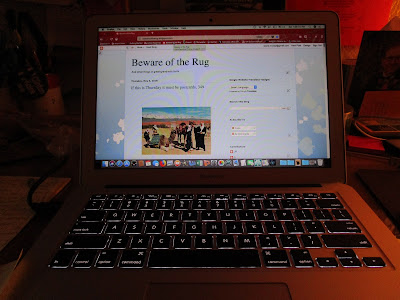 Up and at least partially running
at 10:32 PM