If this is Thursday it must be postcards, 349 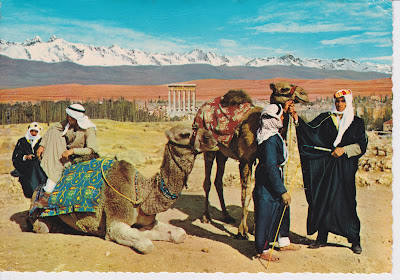 
Jack P. Dadian of Beirut, Lebanon published this postcard with a color photograph of camel drivers.  On the reverse at the center bottom has a logo with Kruger in a circle and the number 987/83.  A friend who travels to the most interesting places sent this card to us many years ago.

Baalbeck or Baalbek is a city with a population of almost 83,000 located in the Anti-Lebanon foothills, the snow covered mountains in the background of the photo.  It is about 53 miles or 85 km from Beirut and 47 miles or 75 km from Damascus.

People have been living in this valley for over 8,000 years.  Among the many ruins in the area are the six columns in the center of the photo from what was at one time a huge Roman Temple of Jupiter that was started in the 1st century and completed in the late 2nd or early 3rd century.  The pillars are 312 feet or 95 meters high.  In past times the temple was pillaged for its stone and suffered damage from earthquakes; however, the south facing side of these remaining six columns is in almost perfect condition while the north side has been worn almost bare by the wind.

The two stamps on the postcard were also interesting.  The one shown immediately below has a commemorative stele of Nahr al-Kalb high on the hill.  Apparently conquerors would build monuments at the mouth of the river.  The one on the stamp is “Christ the King,” and overlooks the river basin.  The stamp was printed in 1966. 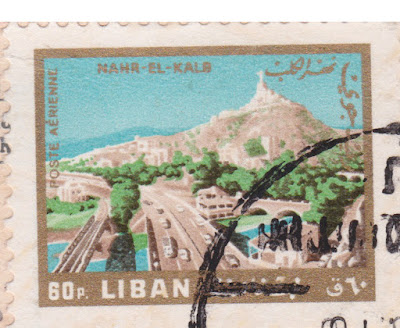 The second stamp has the famous landmark called Pigeons’ Rock, also known as the Rock of Raouché or just Raouché, that is found at Beirut’s western tip.  The rocks are a popular tourist destination.  The stamp was printed in 1967. 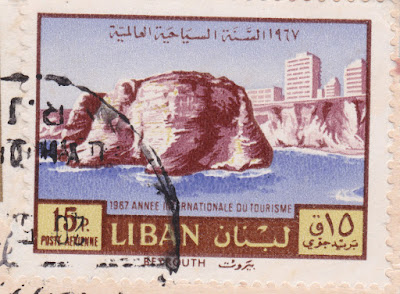 Pigeons’ Rock, also known as the Rock of Raouché or just Raouché, stamp 1967


Thank you V for sending the card "way back when."  It was fun to rediscover it and be able to share it here on the blog.