If this is Thursday it must be postcards, 341 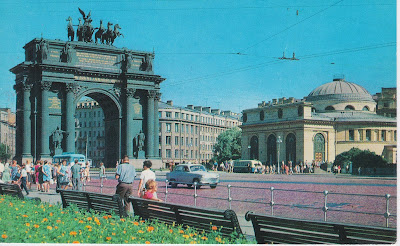 This is one of several unused postcards that were sent to Bob many years ago by a cousin living in St. Petersburg, Russia.

Today’s card has a picture of the Narva Triumphal Arch erected in 1814 in Stachek Square, once called Narva Square.  Built of wood and constructed on the Narva highway it served to welcome soldiers returning from their victory over Napoleon.  Weather resistant plaster was used on the exterior but was never designed to be permanent.  The original architect was Giacomo Quarenghi.  Vasily Stasov redesigned and rebuilt the gate in stone between 1827 and 1834.  The sculptures found on the arch were combined efforts of Vasily Demut-Malinovsky who did the lower figures and designs and Peter Clodt von Jürgensburg who sculpted Nike, Goddess of Victory, in a cart drawn by six horses found on the top of the arch.

The arch was not protected from artillery bombardments during World War II and the Siege of Leningrad [St. Petersburg] 1941-1944; therefore, it suffered damage.  Restored in 1951 there is a small military museum located in the upper part of the arch that opened in 1989.  Another restoration project was finished by 2009 and the arch is now in fine condition.