If this is Thursday it must be postcards, 342 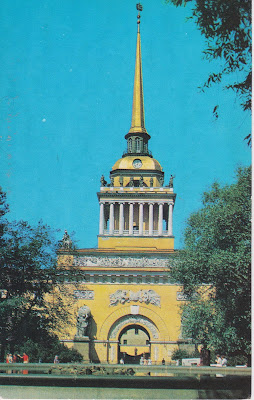 
This week has the second of several postcards sent to Bob many years ago by a cousin living in St. Petersburg, Russia.


The Admiralty building shown on the card is one of the most noticeable landmarks in St. Petersburg, Russia.  It is the former headquarters of the Admiralty Board and the Imperial Russian Navy and remains today the headquarters of the Russian Navy.  Andreyan Zakharov designed and constructed it between 1806 and 1823 it reflects the Tsar’s maritime ambitions.  It is located where the three streets, Nevsky Prospekt, Gorokhovaya Street and Voznesensky Avenue meet.  The gilded spire is topped by a golden weather vane in the shape of a small sail warship.


The original design included a fortified shipyard surrounded by five bastions and a moat.  Though they are difficult to make out on the postcard there are a number of sculptures and reliefs and a clock on the building.