If this is Thursday it must be postcards, 335 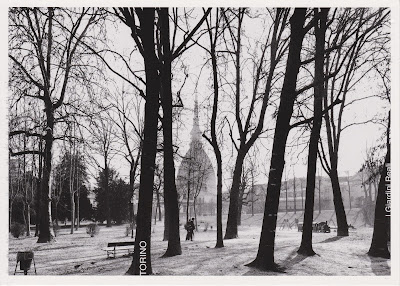 This week’s postcard has an elegant black and white photo showing part of the Royal Gardens in Turin (Torino), Italy.  This is another of recent postcards sent by my friend who lives in Italy.

Piero Ottaviano is the photographer, the card is a POPCARD publication with the identification number:  T723.   A search for information about Ottaviano and associated images revealed that while he is interested in light, color and architecture he has mainly photographed weddings since 1991.  Several of his images were in black and white such as this one but others were in color.  In addition to his wedding photos he has also taken a number of pictures of Torino city scenes including buildings.  The major landmark building of Turin in the background on the card is the Mole Antonelliana.

The Royal Gardens are located in the city center.  One aerial view on a travel web page shows the green park surrounded by the bastions that were built in the late 1500s by Emanuel Filibert of Savoy when he moved the capital city of his duchy from Chambéry to Turin.  The bastions were redesigned by André le Nôtre, a famous garden architect in the 1600s.   The gardens were inspired by the gardens of Versailles in France.  Today a number of summer events are held here involving music, cinema and a combination of both.  The park is one of the gems of the city.

As always my thanks to my friend for sharing this postcard.