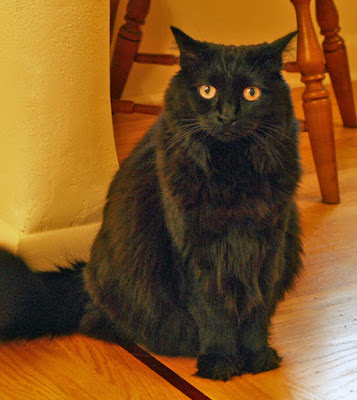 "No, I do not glow in the dark.  What are you talking about?  What just happened?  Why does my box have that symbol on it?"

TBS does not have a “Service Animal” jacket and I doubt we could get it on her, nor is she really a service cat of any type unless she believes she is giving us service by sharing a house with us; however, if a Geiger Counter were to pass over her now it would click.  She does not glow in the dark and is not radioactively harmful to humans or other animals but we do have to follow some rules for a few more days.

As many know, TBS does not travel well or at all if it can be avoided.  About two years ago our usual veterinary clinic suggested it might be best if we found an at home vet service to treat her since she disturbs other patients when in the clinic and it is a traumatic event for her and us and the vets treating her.  We made the change from clinic to home service.  About a year ago she was diagnosed with hyperthyroidism.  At that time we began giving her a compounded liquid prescription in her breakfast.  We called it chicken gravy so she would not be too suspicious.  She loved the stuff and willingly ate it all up.  We were delighted.  This meant one less hassle with this far from hassle free cat.

TBS was not exhibiting any of the symptoms associated with thyroid disease except increased appetite and occasional frantic running around the house and playing vigorously with favorite toys.  She looked and acted very healthy, was eating well and had not lost weight or muscle strength.  Many cats can stay on this medicine for years and remain healthy. But, alas, that was not the case with TBS.  The most recent blood work showed the thyroid levels still increasing despite the chicken gravy.

The second option, which we originally rejected since it involved at least one trip into a clinic, was radiopharmaceutical treatment.  That treatment is a complete cure as the thyroid tumors are given radiated iodine to get rid of them.  Her tumors were not yet cancerous but would become so if we did not do something.  The treatment is expensive but not as expensive as having the blood work and tests every few months plus the medicine.

Now we were faced with a treating a potentially fatal condition or hospice care followed by euthanizing her at a too young age.  We decided to try the treatment not having the foggiest idea of how we were going to get her into the carrying crate and off to the treatment center.  We knew only too well what her behavior would be like.

Bob says I was nervous for almost a month and in a near panic the three days preceding the appointment, as we still had not figured out how to trick her into the carrier.  The vet service had given us capsules of a relaxing medication to be administered in her food the night before and also a couple of hours before departure from home.  We really didn’t notice any change from the doses.  There was no pleasant drowsiness.  Plenty of prayer seemed a good idea. 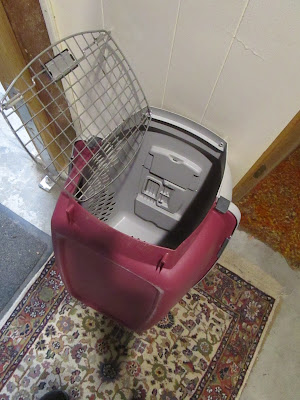 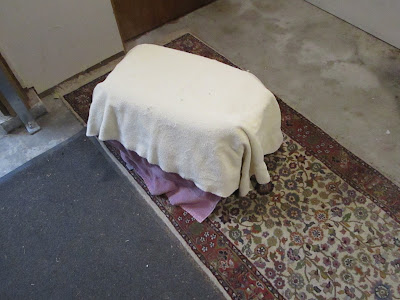 Several people, including the vet, had suggested putting the crate on end and stuffing her feet first into it preferably with a towel around her hind feet.  That is what we did and it worked surprisingly well.  TBS has the memory of an elephant and may not be able to be tricked like this again but it worked when it needed to.  We had to catch her first and stuff her in quickly, then latch the door and secure it with a bungee cord.  Much growling, hissing, snarling and yowling followed a squawk of surprise and an unsuccessful attempt at clawing a way out.  These are normal and expected noises for TBS when about to travel.  Two towels were draped over the carrier, much like covering a birdcage, to calm her.  At first plaintive mews serenaded us as we drove to the clinic soon followed by more angry and frightening sounds.

Soon after we arrived at the clinic a nurse took her in the towel-covered crate into another room where we met with the vet, Dr. Vaughan.  Many unpleasant noises were now emanating from the crate.  The nurse was called and it was suggested that TBS be moved to an isolation room, given an anti-anxiety drug, lights out, with the towels still over the crate.  She would be completely sedated for the treatment itself and would be out for about 10 to 15 min. during which time she could be weighed and examined and administered the dose of radioactive iodine.  Dr. Vaughan likened it to the wild African animals sedated for examination and tagging.  She would have to work fast and efficiently.  Most domesticated cats do not need to be sedated for the procedures.  As soon as the radiation levels got low enough she could go home, usually a day or two after treatment.  Dr. Vaughan has treated many difficult cats and was not at all ruffled by TBS.  Inwardly I heaved a huge sigh of relief.  We were called the next morning and told that the radiation levels were down and we could pick her up that day.  I don’t suppose they really wanted to keep her any longer than necessary as she was still disgruntled when we picked her up even though she had had another anti-anxiety pill. 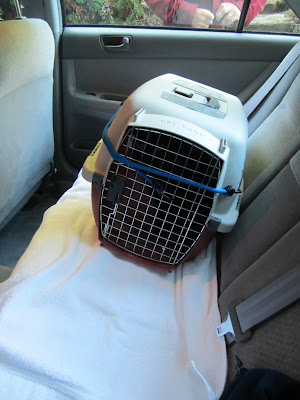 The two original towels were contaminated and did not come home with us. 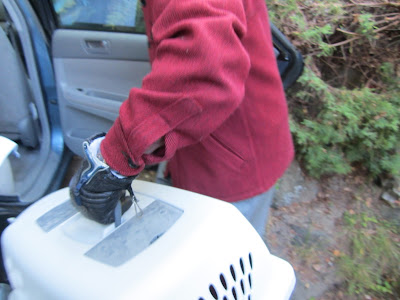 TBS made the expected protestations in the car on the way home.  A stay of a few hours alone in the office once we got home followed by freedom and food, sniffed at before eating to make sure there were no suspicious additives, seemed to help her get back to a more normal behavior.  After two weeks she will not be setting off Geiger counters anymore but Washington State law says we must keep her litter contained for 80 to 90 days before disposing it in the garbage.  There are still two post op appointments to check on the results but those can be done by the at home service.  We hope there will be no more need for TBS to travel for a long, long time. 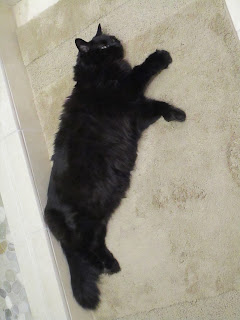 "That was exhausting.  I think I'll just relax here on the heated floor for a bit."


PS  More information about this treatment is available at:  www.felinehtc.com
at 1:57 PM