If this is Thursday it must be postcards, 331 [a few days late] 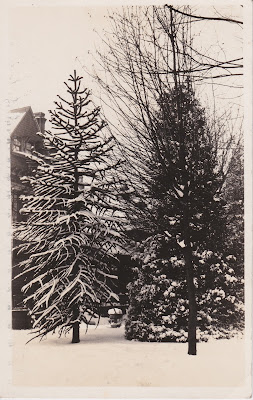 
[Note:  I was without a computer for a few days so this Thursday postcard is a few days overdue.]

Although this postcard looks more like a snapshot than a card it was printed as a postcard.  That was a fairly common way to share pictures of places, people and even pets in the early 1900s.  There has not yet been significant snow in the city this year but the photo was probably taken in 1916 when Seattle had a heavy snowfall.  The undated note on the back says:  “In front of Harry Whitney Treat’s Home, Queen Anne and Highland Drive.”  The Treat family lived in this 64-room home from the time it was completed in 1905 until his death in 1922 when it was sold to developers.  Then it was turned into apartments.  In 1975 it was modified into what is today known as the Gable House complex.  It is a Seattle Landmark building worth more than 11 million dollars.

I thought it interesting and amusing to think that someone took this picture showing the snow covered trees and not much of the mansion.

Harry Whitney Treat was a businessman and financier who originally came from New York and arrived in Seattle in 1902.  He formed a partnership in 1896 with the promoter, Ed Blewett, for whom Blewett Pass is named.  Together they formed the Van Anda Copper and Gold Company on Texada Island in the San Juan Islands.  They had three mines, the Little Billie, the Copper Queen, and later the Cornell.  Under Treat’s leadership the mining operations moved underground.  Blewett and Treat developed a narrow gauge railway to move the ore to dumps on Van Anda Bay.  By 1900 they had also constructed a smelter to service not only their mines but also other mines on the island.  Treat was called “The Magician” who waved an invisible wand and his caves produced copper, gold and silver.