If this is Thursday it must be postcards, 291 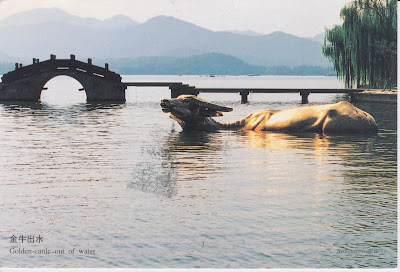 When I found this card sent to Bob’s son by a friend in 2005 from Hangzhou, China it reminded me of another card I had shared not too long ago that had a picture of a white Merlion on the bay in Singapore.   This golden water buffalo is partially submerged and I cannot tell if it is a full sculpture or if the part above the water is the complete piece.

The sculpture is found in West Lake in Hangzhou, Zhejiang province in eastern China.  There are numerous temples, pagodas, gardens and artificial islands in this lake that is divided in 5 sections with three causeways.  The natural beauty and historic relics have been the inspiration for Chinese poets and painters though the ages.  This area has also inspired Chinese garden design.  In 2011 UNESCO designated it as a World Heritage Site for its influence on gardens in Japan and Korea as well as China.

The lake has had several different names and was first recorded as Wu Forest River; however, only two names have been widely accepted Qiantang Lake, Hangzhou was anciently called Qiantang; and West Lake since it is located west of the city of Hangzhou.   More than 2,000 years ago the lake was part of the Qiantang River but over time soil sedimentation from the surrounding mountains gradually built up and formed shoal heads that later grew and merged into a bank, formed a lagoon and eventually resulted in the lake.  The Big Stone Buddhist Temple located at the north end of West Lake can still be seen.

Around 610 AD the final canal connecting the five major rivers, Hai, Yellow, Huai, Yangtze, and Qiantang, was constructed to facilitate transportation to and from Hangzhou thus boosting regional economy and inviting tourism.  Floods occurred during heavy rains and the lake would dry up during long dry spells.  Dikes and dams were constructed to help control the flow of water and prevent serious problems and also to help local farmers who needed water for irrigation.  Hangzhou has a rich heritage and has been a center of politics, economy and culture.  There are several parks in the West Lake area with abundant natural and cultural attractions.

Buffalo, oxen, cattle and cows are motifs found in Chinese mythology.  Some of the myths relate to plowing and agriculture or ox-powered carriages or carts.

This postcard also had some very pretty stamps.  The first one seen below is of Formosan Blue Magpies, one stamp out of a set of nine different bird stamps issued in 2002 and used until 2006. 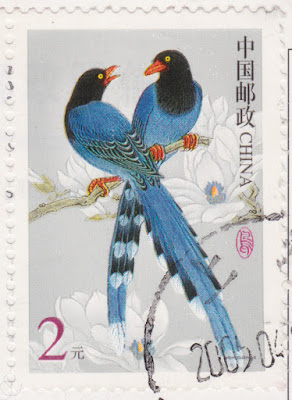 The second stamp, with a botanical theme, was printed on the postcard. 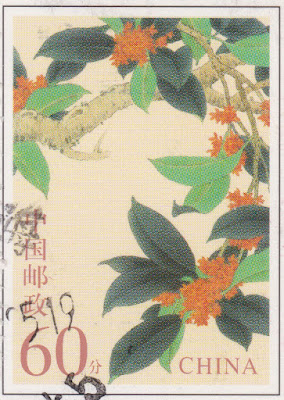 The following links have information about both the area, the stamps and the oxen myths: