If this is Thursday it must be postcards, 288 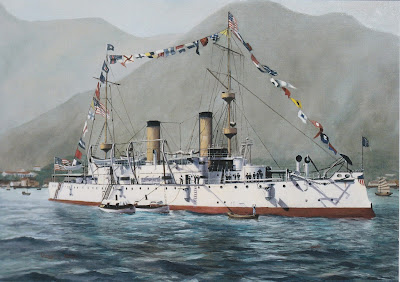 Here is another historical ship postcard.  This one has a painting of the USS Olympia in Hong Kong, 1898, by Marine Artist, Douglas Michie of Gig Harbor, Washington.   The postcard was recently found in the gift shop at the Washington History Museum in Tacoma, Washington.  The only identifier on the reverse of the card is:  Modern Postcard, 800/959-8365.

The USS Olympia is a protected cruiser, had less armor with large guns, making it faster than a fully armored cruiser.   She is 344 feet or 104.8 meters long and 53 feet or 6.1 meters wide.  The crew consisted of 33 officers and 396 enlisted men.  Powered by coal, the top speed was 22 knots or 25 mph.  Named after the city of Olympia, the Washington State capitol, it was built by Union Iron Works of San Francisco, California.

The ship is famous as the flagship of Admiral George Dewey (1837-1917), at the Battle of Manila Bay during the Spanish-American War, 1898.   Dewey who was Commodore at that time later went on to become the only person to attain the rank as Admiral of the Navy.  The USS Olympia was the largest of Dewey's ships and was bigger than any of the Spanish ships.  It was on the bridge of this vessel that Dewey issued the famous order to his captain:  "You may fire when you are ready, Gridley."  Following that war she was decommissioned in 1899 but then re-commissioned and entered into active service once again in 1902.   From 1902 to World War I she was a training ship for naval cadets and acted as floating barracks in Charleston, South Carolina.  In 1917 she was mobilized for war service and was used to patrol the American coast and escort transport ships.

Following World War I she cruised the Mediterranean and Adriatic Seas to promote peace.  One of her last acts of service was to carry the remains of the Unknown Soldier of World War I from France to Washington, D.C. where his body was interred in Arlington National Cemetery.  She was decommissioned the last time in 1922 and placed in reserve.  In 1957 the U.S. Navy ceded the title to the Cruiser Olympia Association, which restored the ship.  Today she is in the Independence Seaport Museum in Philadelphia, Pennsylvania.

The Olympia is the oldest steel U.S. warship still afloat.  The ship is need of maintenance but attempts to find outside funding of the approximately estimated ten million needed to restore her to stable condition have failed; therefore, under the guidance of the U.S. Navy she was put up for availability to new stewards.  Several groups expressed interest in becoming the new steward but none provided long-term solutions so the ship will remain in Philadelphia where the Museum will launch a national fund raising campaign for her preservation.  In the meantime, minor repairs to the ship have been made but there is major waterline deterioration.   The Olympia was designated as a National Historic Landmark in 1966 and is also a National Historic Engineering Landmark.