If this is Thursday it must be postcards, 285 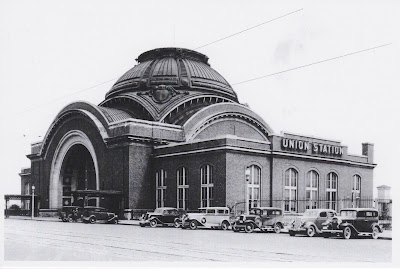 The black and white vintage photo on this card shows the Union Station in Tacoma, Washington around 1939.  The card printed by Lantern Press, of Seattle, Washington has the identifying image #12839.  The color photograph below is of the building as it looks today.  It is no longer a railway station but is currently used as a courthouse for the United States District Court for the Western District of Washington.  I found the card in the Washington Historical Museum in Tacoma on a recent visit. 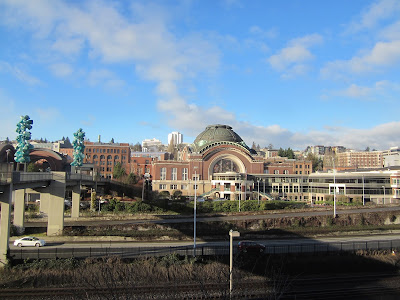 In 1873 the Northern Pacific Company chose Tacoma as the western terminus of the transcontinental railroad then still under construction.  From 1873 to 1890 the population of Tacoma soared from 2,000 to 37,714.  With rapidly expanding industrial and commercial development the city became known as the “City of Destiny.”

Tacoma’s first railroad station was built in 1883, moved to its present location and enlarged in 1892, and then in 1906 the architectural firm of Reed and Stem was selected to design a brand new station.  They chose a Beaux-Arts style of elegance and efficiency.  Once the design was accepted construction began in 1906 and was completed in May 1911.  According to the U.S. General Services Administration Union Station was hailed as the “largest, the most modern and in all ways the most beautiful and best equipped passenger station in the Pacific Northwest.”

Passenger train use diminished with the growing popularity of automobiles and later air travel resulting the last passenger train leaving the station in 1984.  The building was then abandoned and began to fall into disrepair.  In 1987 the U.S. General Services Administration received authorization from Congress to lease the Union Station to provide space for the United States District Court for the Western District of Washington.  Three years of restoration and renovation followed with the federal courts occupying the space in 1992.  Although no longer used as originally intended the structure is hailed as a highly successful use of a Tacoma landmark.  The large 90 ft high copper dome with four large cartouches dominates the building and creates an impressive rotunda in the interior.  One of the cartouches can be seen as a lighter design on the dome in the photo below and as a relief on the black and white vintage photograph shown on the postcard at the top of this page. 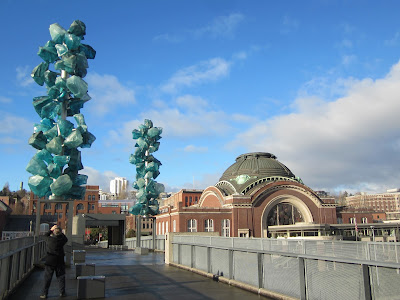 Closer view of the dome with one cartouche visible

The exterior is multicolored red brick with a limestone base containing ornamental details.  Union Station was added to the National Register of Historic Places in 1974.